Photo of the Week: Smooth Operator 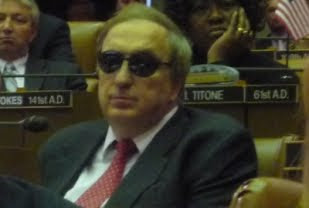 This one comes courtesy of The New York Observer. Vito was interviewed by Jimmy Vielkind (the photo was also taken by Jimmy) over whether he would be supporting Governor David Paterson's bid for re-election.
"Too early," Vito said.
When he engages, Vito tends to say what many other state party leaders are thinking but not speaking publicly. Keep listening. He'll be one of the first people to say something if the tide turns against the Governor (or doesn't turn) from the rank and file.
Posted by Aaron Short at 1:30 PM