Community Board One: J-Law Creates a Scene 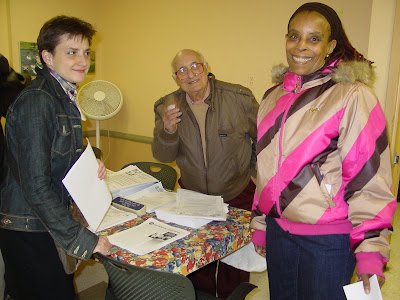 6:02 PM: It’s my 400th post and coincidentally it’s time for another Community Board One Running Diary. So far, there are four people are here. None of them are from Neighbors Allied for Good Growth (NAG). Why? Because they're drinking in their office. Guys, couldn't you have done this at 211 Ainslie? 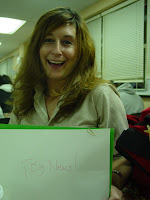 One of the people here is OSA’s Julia Morrow. The weather is getting colder, but she’s got lots of parks-related programming coming up. Hey Julia, who won Brooklyn Kickball League this year?
“It was the JCMs!” said Julia.
The John Cougar Mellencamps, that is. They’ve been trying to win for years and they keep getting slighted. They're kind of like the Cubs. Anyway, hat's off to the JCMs and yeah, Mellencamp is still reportedly pissed and wants royalties.

6:26 PM: The room is filling up more now but Press Row still has a table to itself. I looked at the agenda a few hours ago and saw two things listed: some BSA variance on Lorimer street and a report about post office hour changes. Who do you guys think you are? Community Board Four? Can someone make a scene please? Julie! Julie Lawrence! Lay down the J-Law!

6:40 PM: District Manager Gerry Esposito takes roll call. 21 members attending. Chairman Chris Olechowski rolls right into the public items. We start off with the variance and Ward Dennis, aka Ward's Island says that this issue will get taken up in the land use committee. It's fun to visit Ward's Island! 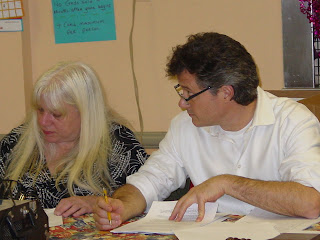 6:45 PM: A spokesperson with the USPS gives a short presentation about the Post Office. It's everything you ever wanted to know about the Post Office. None of the branches are closing and most of the things that you do at the local post office you can do online.
“We’re hiring right now. This is the hiring season!” says the Post Office rep.
Ooooh, maybe Teresa Toro can be a Post Office Elf!
“You know I was a Macy’s Christmas Elf twice,” said Teresa.
No, I did not know that.

6:53 PM: Roll call for the meeting and we're up to 29 members. Linderman has settled into Press 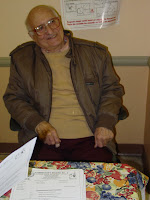 Row and Paul Pullo strolled in too. The owner of MetroEnergy, Pullo will be in the middle of EPA Superfund discussions in Greenpoint. How? You'll have to read the link to find out more.
"How long do you think it took for (The Chairman Emeritus) to be good at running meetings?" says Linderman.
"Birth," I say.

Chairman Chris announces that there was a rally against crime in the Southside held by Assemblymember Vito Lopez. Apparently CB1 members were not informed about the rally.

"I never heard anything about this particular rally. Maybe it's something we wanted to attend. CB1 was... uh... conspicuously placed on this flyer. I wanted to speak with someone listed at the bottom of this flyer, the woman's name is Maritza... and I called and found out she's no longer working at Vito's office," says Chairman Chris.

7:02 PM: Committee Reports. We'll stick to the highlights.
*Rabbi Joseph Webber talks about the new attendance policy regarding absences. They want five absences to kick off a board member but Mieszko Kalita wants only three. Mieszko is wearing a nifty red pullover fleece sweater. Red is a good color on Mieszko. 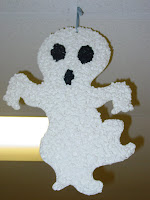 Chairman Chris gives a detailed account of the attendance policy pertaining to general meetings and committee meetings, and he wants to say that he seriously doubts members' commitment to Sparkle Motion.

Jaye Foxe raises an objection but it's not about the number of absences, its more about how people get on which committees. She's very passionate about this issue. This takes twenty minutes.
"I'm not on one of the committees I asked for! Zero!" says Jaye.
Peter Gillespie, who is not at NAG's Beers at the Office says that he has been assigned a committee that has never met in the entire time that he has been a member.
The Chairman Emeritus is witnessing all of this and he is not happy. 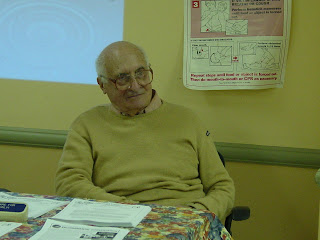 "It's effective January 1?" one CB1 member asks.
"It's effective immediately," said Chairman Chris
A verbal brawl ensues.
"I have a question!" says a Hasidic member.
"We're in the vote," says Rabbi Webber.
"I have a question!" says the member.
"You're out of order!" says Rabbi Webber.
The board member, a Hasidic man who hasn't shown up to meetings lately is upset about an issue, but it's not the one being discussed right now.
"You were not thrown off the board yet!" said Rabbi Webber
The Gazette's Jeff Mann: I just want Rabbi Webber to say, "No Questions! No F###ing Questions!" 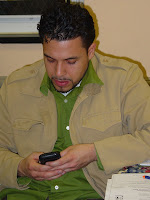 7:42 PM: A text from CB 2 member Lincoln Restler: "Anything interesting happening at CB1?" Six minutes later, the board approves Item Number 4. Also, The Chairman Emeritus has left the building. He has to catch the next episode of NCIS: Los Angeles.

7:54 PM: Mercifully, the votes are over. We're into announcements. Chairman Chris yield the floor to a rep from the Borough President's office who mentions that the office will be giving out flu shots on November 17th from 11 AM to 2 PM. No word on whether Party Marty will be wearing a candystriper outfit.

7:58PM: We make a return voyage to Ward's Island for a ULURP committee report who bundles a group of sidewalk permit applications (it passes) and brings up The Finger Building.
"It's time to get this building completed," says Ward.
Board members apparently agree. This passes too.

8:02 PM Rami Metal Plate wanders in from another event.
"I think I'm mad at Rami but I don't remember why," says Linderman. "Am I mad at you?"
"Are you mad at me?" says Rami
Tune in next week to find out why Linderman may be mad at Rami. xo xo... Gossip Board. 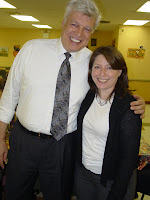 8:09 PM Teresa Toro gives a quick report about I-watch, the state DEC's stop smoking initiative to reduce truck idling in Williamsburg and Greenpoint, an interesting program worth watching. She also notes the planned street construction of Nassau Avenue, which is an emotional issue for Toro. She's been working on this intersection for a while.
"People die there, get injured there, it's a frequent crash location," said Toro.
Florentino stops by Press Row to mention that a lot of members are not here tonight because St. Nicks Alliance is having their 34th anniversary tonight. Strangely he's in a good mood despite the pall that has now fallen over 211 Ainslie as we mark the second hour of this meeting. Probably still walking on airs because of this.
Also Linderman tells me she has a big exit interview with ex-Councilmember David Yassky. Well, he's not an ex just yet. I'm not so good with exes.

8:23 PM: J-Law raps about the Pulaski Bridge project and the EPA superfund process for Newtown Creek, where she attended two big meetings hosted by NCMC and NCA. The NCMC meeting lasted three hours, almost as long as it will take to clean the actual waterway.

8:27 PM: Mieszko brings up an issue regarding Lucky Dog Restaurant's hours of operation. The bar/ restaurant, located on Broadway near Hewes Street has, according to several neighbors, become a major irritant concerning noise and smoke and they have been negotiating with the Lucky Dog owners at the CB1 office in late October. Let's play the anthem!

8:32 PM: And we're into public session!
Text from NAG's Lacey Tauber: "We are now just talking about NAG. Beers are delicious. There are about thirty people here. How's the meeting?"
*Two residents are upset at Lucky Dog and its noise problem
*A dog-owning resident near Metropolitan and Union Street wants to start a group to clean up Macri Park, particularly for dogs.
*Julia Morrow finally gives her report about parks in North Brooklyn. She's got Big News. Plans for the full renovation for Transmitter Park were approved. Also the Skate Park opened unofficially. And there's a sculpture park opening in McCarren Park on November 22nd that NbPAC is launching.
*Librarian Dennis Stewart shares some ongoing programs at the Brooklyn Public Library. There's a real magic show coming up with Gary the magician at The Leonard Branch. There will also be career cruising. No word on whether Gary the magician will be looking for another career utilizing Brooklyn Public Library services.

I think the Committee Assignment issue is bigger than we realize. It's the Chairman's way of controlling the voices on the board -- especially the ULURP Committee. There are a number of insightful knowledgable people who actually know zoning policy that were excluded from the ULURP Committee -- for what reason, you should ask.

So Aaron, if you're looking for a new conspiracy to investigate, go there.

Again, thanks for your stellar reporting. It's so much better to read about it than be there!!

p.s. I was a little worried about whether or not there would be enough beer at the party -- but in the true spirit of true grassroots magic, more of it just kept appearing out of nowhere!!

Anonymous #2 is on triple secret probation. You know who you are.