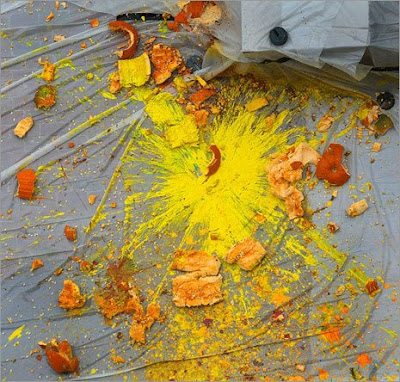 Photo by David L. Ryan of the Boston Globe Staff

I know, your head still feels like this and it's Monday. Cheer up. There's a lot to keep track of the coming week. So wipe off that zombie makeup and take a look at the hottest political stories as the election looms tomorrow.

If it's November, then it's City Hall News' time to shine. They're all over the place with stories about the risks and rewards for a Bloomberg third term, the upcoming fight for new committee chairs in City Council, the Working Families Party basically ignoring Billy Thompson, and an inside look at the two men behind both mayoral campaigns. Nice job guys. 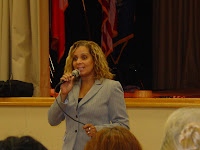 Be sure to check out my BushwickBK 34th District Election preview: Diana v. Maritza II! And The Times has more on the Catholic robocalls that have been going out to 34th District voters since Thursday.


A little closer to home, Jackie Robinson's widow and Marty 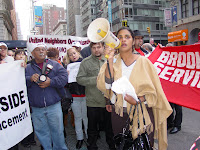 Markowitz endorsed Mayor Bloomberg, deceased BLS attorney Rick Wagner casts a shadow over consolidation proceedings, Juicy Juice is sponsoring a playground at East River State Park (sugar not included), Brooklyn bartenders are armed and dangerous, Honorary Judge Miss Heather videologs the District Dog Halloween Parade, The WG News and Arts tries to figure out what Bushwick is all about (answer: illegal lofts), Matt Chaban at the Architect's Paper looks at a stunning (on both sides) project proposed on the Greenpoint waterfront, and The Observer's Reid Pillifant craps on Philadelphia, along with everyone else.

Finally, for the wonk who has it all, check out Gotham Gazette's Election Day Preview, hot off the interweb presses. And Alex Pareene at Gawker had an editorial that tries to put it all together.
Posted by Aaron Short at 2:00 PM