There have been a few stories going around about the effects of Reyna's victory on the Democratic Party in Brooklyn, though we won't know the full impact until county committee members and Democratic district leaders are elected next fall. Anyway, check it...

Two weeks after the general election, Assemblymember Vito Lopez (D-Williamsburg) is looking forward to a busy legislative agenda in Albany this winter.
On tap are new affordable housing initiatives, programs to deal 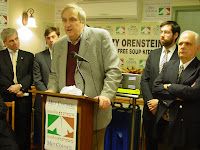 with stalled and vacant condominiums, and rent regulations as well as his own emergency food program, which will serve thousands of meals to housebound seniors on Thanksgiving and Christmas.
Yet sore feelings remain over Martiza Davila’s defeat in her bid to unseat incumbent Councilmember Diana Reyna. Lopez, the Kings County Democratic Party leader, backed Davila in the Democratic primary and again in the general election where she ran as a Working Families Party candidate. He sees the election result not as a repudiation of the Brooklyn Democratic Party but as a testament to Davila’s strength and popularity in North Brooklyn, despite difficult odds.
“Martiza got over 6,000 votes. That’s a remarkable number. Maritza’s turnout was a huge victory,” said Lopez.

Yet she still lost. In the wake of Reyna’s 4,000-vote margin of victory, some leaders in 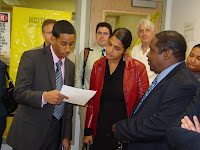 progressive organizations and political clubs throughout the borough are raising questions regarding whether the election has weakened the Brooklyn Democratic Party machine that Lopez runs. Once an ally and esteemed member of Lopez’s staff, Reyna has now become a political rival with two victories against a candidate that Lopez backed forcefully.
“The election shows that Vito is not all-powerful,” said New Kings Democrats President Matt Cowherd, who lives in Lopez’s 53rd Assembly District. “I have equated it to when Toto pulls the curtain back on the wizard. I think Assemblymember Lopez benefits more from reputation and notoriety than reality.”

The refrain from many Reyna supporters over the past week has been that a new political coalition of Williamsburg groups uniting over issues such as the Broadway Triangle rezoning was forged during the primary and general election. Rob Solano, Executive Director of Churches United for Fair Housing, argued that Lopez wanted the Council seat badly and miscalculated by continuing the campaign on the WFP line.
“If the machine didn’t take a hit, if everything is in its place, then why throw everything after Diana, why go after the church, why pull the favors, why run the campaign yourself? This was an embarrassment,” said Solano. “Unless the machine is broken, you don’t get people elected and not know the numbers. If you’re the machine, you don’t take these huge risks.”
Not so fast, say many political observers who credit Reyna’s general election win as illustrative of 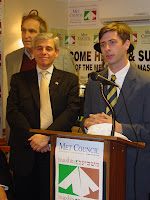 the challenges that a third-party candidate faces in a district that overwhelmingly votes Democratic.
“When you’re running on a third-party line, and Maritza got almost 6,000 votes on the third-party line, that’s remarkable in and of itself in a heavily democratic district,” said Councilmember-elect Steve Levin.
Former State Senator Martin Connor agreed, saying the race had little to do with Lopez’s political capital and that he retains a strong advantage when seeking reelection to the State Assembly in September 2010.
“I would really seriously doubt that the assemblyman is vulnerable in a democratic primary if he is running,” said Connor. “(Lopez) is very effective campaigner and organizer.”
Political consultant Hank Sheinkopf noted that the Reyna-Davila race revealed more about the strength of the Working Families Party than the Democratic Party, which did not deliver a victory for Davila despite endorsing her.
“It shows that the Working Families Party does not provide an ideological alternative to Democrats,” said Sheinkopf. “Vito Lopez has the ability to in fact create the political, social, and economic connections that people really need and want.”
That is precisely the point argued by sociologist Nicole Marwell, a professor at CUNY who wrote a book, “Bargaining For Brooklyn,” about non-profits and the political machine in Williamsburg. She believes that Reyna’s win is a “story about the power of political parties above and beyond the power of kingmakers,” and that Democrats were reluctant to vote on the Working Families Party line.
“I think the assemblyman’s read of it is that for his organization to pull 40 percent of the vote on a third-party line is a testament to their strength,” said Marwell. “Don’t start digging the machine’s grave. News of its demise will be greatly exaggerated.”
When asked for comment, Reyna said she was focused on upcoming council business and did not want to dwell on the ramifications of her victory.

I liked this article. Recently, people have been talking about who really won and the impact on the machine. This is an article (well, the Courier version) worth forwarding on. I also like the "neither here nor there," conclusion

If you were in Lacey's class, you'd get probably get a B+!

I think that it’s just inaccurate to refer to “the machine,” when in reality, there are several organizations, or coalitions here in North Brooklyn. Diana Reyna had two members of Congress, Rep. Velasquez and Rep. Ed Towns and their staffs out on the street for Reyna during the campaign. Also, staff members at Legal Services Corp. A, Los Sures and St. Nicholas, the three not for profits that would directly benefit if the Broadway Triangle plan fails, and who also receive member items from Reyna, also worked on her campaign in very large numbers. To suggest that Lopez is the only politician in the area that does what he does is naïve at best, and at worst shows an agenda on your part to present a biased version of events.

Nicole Marwell is probably the first person to characterize the Brooklyn Democratic Party, and Ridgewood Bushwick in particular as a modern political machine, which is an astute conclusion grounded in research. This is not an opinion or bias here. We could have a longer discussion about this, but I don't see Reyna yet rewarding an army of nonprofit volunteers with political patronage in one form or another beyond discretionary funds she has spread throughout the district to friends and foes alike. The coalition that was cobbled together this year will be more diffuse after the Broadway Triangle rezoning is voted on in council. Other projects (e.g. Domino) could end up causing fissures that coalition.

another difference is that Diana Reyna did not create her own enormous CBO to become the largest local employer and the conduit for all social service money into the area, reminding all recipients of exactly how to show their gratitude. She does not bully and threaten organizations who do not demonstrate sufficient loyalty. She does not print the "ONLY community newsletter" and put her own face on it as "A Living Legend." There is a good reason those representatives and organizations put themselves into the struggle. All things are not equal here, much as you might like to see it so.

Don't forget that ridiculous "thank you" lettering for Lopez at 555 Bushwick Ave.

How about "Eric Lopez Place" (Evergreeen and Troutman) and the "Yolanda Lopez Residence for the Elderly" at the same location. Did Lopez's mommy and daddy ever walk the streets of Bushwick?

What is up with that?