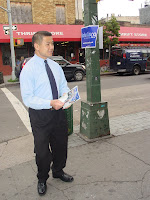 City Hall News has two long pieces this morning to pay attention to. One is the Making of John Liu (Liu York City), particularly the formation of a new minority coalition, how ad man Jimmy Siegal came on board, and what it may mean for facing off against Mayor Bloomberg, if he is reelected this November.
Then there's the continuing saga of the Working Families Party. David Freedlander takes a step back to look at the WFP's role in political maneuvering in City Hall. An excerpt:
The next big hurdle for the WFP will be in the selection of committee chairs and the speakership. Traditionally, county leaders have driven that process, but the emergence of the WFP and candidates who were backed by them instead of the county organizations makes the party something of a sixth borough in the city, and one that is much more cohesive and powerful than several of the existing county organizations.“If you’re running for office, who would you rather have on your side—the Working Families Party or Vito Lopez?” said one operative. “Getting the Working Families Party means a lot more at this point.”
Posted by Aaron Short at 12:50 PM