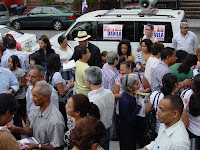 week: an automated message from Brooklyn Bishop Nicholas DiMarzio urging voters to support Assemblymember and Kings County Democratic Chair Vito Lopez and his candidates in next Tuesday’s election.
The robocalls, composed by the Catholic Citizens Committee, a Dyker Heights-based nonprofit dedicated to “defending and protecting the Church from unjust, unwarranted, and unfair attacks in the public arena and preserving religious freedom for all Americans” were blasted out to registered voters in the 34th District (Williamsburg, Bushwick) on October 29.
The message does not mention any candidates by name, referring instead to Lopez’s record in the State Assembly supporting the Catholic Church’s policy agenda.

“Bishop DiMarzio did thank you calls on behalf of Vito Lopez, for all his support in the Assembly. No endorsements, just a thank you call,” said George Prezioso, Catholic Citizens Committee Chairman of the Board.
Calls to the Brooklyn/Queens Diocese for comment were not returned by press time. A volunteer at Lopez’s office said he did not know anything about DiMarzio’s message.
Lopez has backed Maritza Davila, a Democratic District leader in Bushwick who lost the Democratic primary to Incumbent Councilmember Diana Reyna (D-34) by a mere 251 votes.
Davila did not concede defeat, instead choosing to continue her campaign on the Working Families Party Line, setting the stage for a dramatic rematch on November 3.
Reyna supporter Rob Solano, Executive Director of Churches United for Fair Housing, and a longtime Catholic activist in Williamsburg, was informed about the robocall by a family friend.
“I’m saddened that my Bishop is taking time out of his day to support a local political agenda and not take time out of his day to take care of the housing crisis in this community,” said Solano.
Political consultant Hank Sheinkopf said that DiMarzio was likely acting as an independent individual. The calls were similar to the phone calls that black ministers have made for candidates in the past, though he noted that it was unusual that Catholic clergy were making robocalls.

“In the past, the Catholic Church’s approval or disapproval has resulted in victory or defeat,” said Sheinkopf. “This will be a test in this district whether the Church has the power to perform as an entity.”
Both Reyna and Davila have concentrated their efforts on securing Catholic voters by visiting multiple parishes in the district and distributing literature after mass commences. The candidates are expected to attend several mass services during the final weekend of the campaign.
Posted by Aaron Short at 6:24 PM

Aaron short, damn you out scope everyone again!

I thought there was separation of church & state? Am I right or wrong here? At any rate I think if Bishop Dimarzio, has nothing better to do than to make robocalls, maybe he should get a list of the sick and infirmed from each Parish and call them. He could also visit the residents who live and work in the Broadway Triangle and see how they feel about Vito's plan for their community, you know, kind of get behind his Parishners instead of mixing in dirty politics, and back room deals. poochie

It is very sad that Bishop Dimarzio thinks he can manipulate people like puppets. It is down right wrong for him to take his position, his strong influence and people's respect for him as a medium for swaying their decisions. He should get back in touch with his humility, fighting for fairness and equality for people...housing would be a good place to start.

It is very sad to see how the church compromises itself and sells out its own parishes for a corrupt politician. In the end Vito wins and Williamsburg loses. The Bishop needs to care about his people not these blood suckers.

its amazing how church vs. state only applies to the catholic church. wen bush was takin advantage of the religious right it was ok, while obama is now using the black church it's totally fine, and as bloomberg's vote is delivered by protestant/baptist/black churches, no one say seperation of church and state. this country is so anti the catholic church.

This view of catholics in politics come from the church themselves. It's not the anti catholic thing. They have rules that clearly state that they don't get involve in politics . And In this community they have always follow those rules, until now. People in catholic church expect that politics be left out, because that is how the Church designed it to be. I agree other churches do it , but they have been consistent in doing it. The surprise here is out all the guys to get inspired to get political about, they pick Vito Lopez. His record with the catholic church is as left as they come.

It’s extremely disturbing for the bishop to hop on Vito Lopez’s coat tail, but the church has gone beyond Politics 101. It’s obvious that the bishop’s pulse on the community only serves the church and not the parishioners who attend its calling. Williamsburg is screaming for more affordable housing units as a result of the gentrification process that has displaced many there.
The Broadway Triangle one of the last vestiges of open space in Williamsburg where a bounty of affordable housing units could be constructed was opposed by the bishop who threw his support behind Vito Lopez’s HPD proposal and ultimately prompted Rev. James O’Shea’s resignation when he questioned the plan’s initiative in keeping with the community’s best interest in mind.
This has the malodorous scent of backdoor shenanigans. The Markey Bill comes to mind.

It's all good people: our voters are reading and getting informed! They know the deal...you get rid of Jim O'Shea and I (Vito) will write a bill in the Assembly to protect you from facing chapter 11...one hand washes the other! Now DiMarzio has to return the favor. We all know Vito, he needs attention! So most priest with no back bone are giving it to him! Sad part: Williamsburg loses! So when you vote tomorrow, vote DEMOCRAT, vote for our kids and their future, vote for justice!