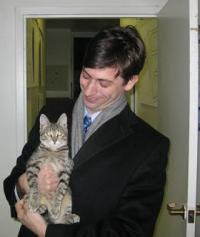 The feline companion of Steve Levin, Democratic nominee for City Council in the 33rd District, finished third in the voting for the Nobel Peace Prize today, behind President Barack Obama, the winner of the prize, and French President Nicholas Sarkozy.
"I am elated but also hopeful. I have a feeling of deep responsibility to live up to the trust that people put within me,” said Levin after learning that he won the Democratic primary, but he also could have been speaking for his pet cat, after learning that she had been short listed for the Nobel.
Levin's furry friend, whose name is being withheld at this time (because I don't know what it is), has been widely credited with working to increase harmony between Assemblymember Vito Lopez and Councilmember Diana Reyna, running negotiations with Develop Don't Destroy Brooklyn members and Forrest City Ratner, and helping Buddy Scotto learn to love again.
"Everybody loves that cat," said Lopez, in a quote deliberately taken out of context.
Levin's cat has big plans for Levin's first term in City Council, including finding common ground among the Broadway Triangle Community Coalition, the United Jewish Organizations, and the Ridgewood Bushwick Senior Citizens Council over the rezoning of the Broadway Triangle, though she will face tremendous challenges fending off fat cats in City Hall, below.