"Excuse please. This is Ivan. I am Sergei. Ve are lookink for DDDB meetingk place. Is this Belorussian Church? Are you DDDB member? Come with us please."
It's all about Atlantic Avenue this week. Brooklyn's greatest street fair, Atlantic Antic (not to be confused with the West Indian Carnival, which is Brooklyn's greatest street festival) is taking over Boerum Hill on Sunday afternoon. But you're already going to be at that, so let's get to the good stuff. How about those Nyets?

Everybody is writing about Russian Billionaire Mikhail Prokhorov's purchase of the Brooklyn, excuse me, New Jersey Nets. Less than a month after the new designs for Atlantic Yards were unveiled, Bruce Ratner floated the idea of selling shares of the Nets, and a Russian oligarch bit. As usual, the Times was all over it (particularly their Sports section), though Clifford Levy smirked his way through the culture shock, Reuters has a nice rundown of the history of moving the Nets to Brooklyn, the Times Sports Section also posted up an analysis of the NBA's global outreach, and some blogs are already talking about Prokhorov's plans to lure LeBron James to Brooklyn. In Brooklyn, Gersh with the Brooklyn Paper has the summary with arguments pro and against, Ben Muessig looks into who the shadowy Barishnakov guy is, following the New York Observer's summary of the real estate deal (by Eliot Brown), Eliot Brown interviews Bruce Ratner for his side of the deal, and our own Steve Witt has his report from Brighton Beach.

Among the other goings on this weekend, there's an Urban 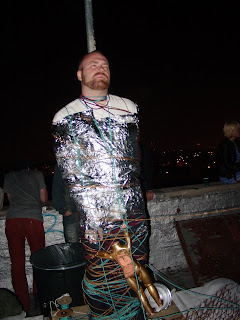 Arts Fair over at Castle Braid (114 Troutman), First Saturdays at the Brooklyn Museum, a Monduna/ Addtract robot party at Brooklyn Fireproof... and.. is he still on that roof? Can someone call Lily Maase and get him down from there?

Lots more to look forward to next week, including Billy Thompson's big weekend. So have fun at the Antic, but watch out for Russian mobsters. And robots. And Russian mobster robots. Beautiful Love!

Nice videos, it was an unexpected action what the Russian guy did, I'm a Nets fan and Im still confused by that decision.