The 34th District Debate post is coming later this afternoon... but first a reminder about tonight.

Yes, there is another (make that 10) debate among the 33rd District candidates. Tonight it's a Transportation-themed debate at Automotive High School, moderated by local Community Board 1 heartthrob Ward Dennis and Transportation Alternatives Executive Director Paul Steely White. Expect a Kent Avenue question or two, as well as questions about truck traffic on Metropolitan and McGuiness Avenues, an overall transportation study for Williamsburg and Greenpoint, bicycle safety, and even the Brooklyn Greenway. Good stuff. In advance, TA has released a transportation survey from those running, so check that out. 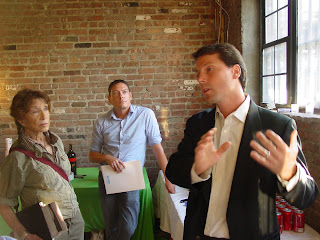 What I want to know is what kind of transportation the candidates are taking to Automotive tonight. Doug Biviano, above, is obviously taking his boat, while I bet Jo Anne Simon is giving Steve Levin a lift on her chopper, below. Thoughts? 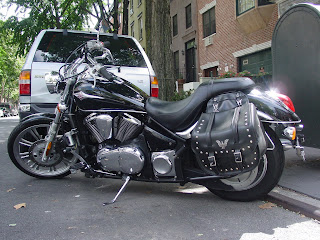 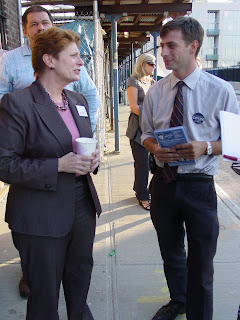 I left before the grand finale of audience questions, but I am thinking there weren't any questions for our candidates on Kent av. specifically. More interesting was to see who would let it show if it was even on their radar. (for tonight , at least) There were 3 unsolicited comments by the contenders in some of their responses to other more broad questions. Isaac Abraham, Doug Biviano , and Ken Diamondstone had some varying degree of incredulity on how the project went down.