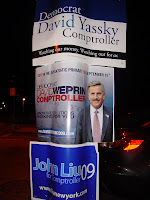 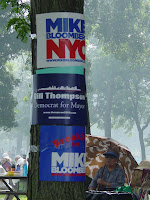 You've seen them everywhere. Day and night. Night and day. On trees and lampposts. In 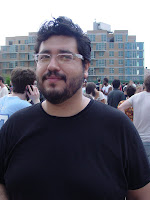 store windows and subway railings. Posters, flyers, mailings, stickers, and buttons have littered the neighborhood in a blurry political blaze of ugly fonts and bad graphic design. Someone needs to sort out the brilliant from the boring. Fortunately, I called for reinforcements. Miguel Lopez, my former roommate, of Brookfield Properties (aka The Winter Garden), has an extensive graphic design background and a well-trained eye for good design.

A breakdown of the rating system, which I'm stealing from The Pour's wine list. Four stars (****) means extraordinary, three stars (***) means very good, two stars (**) average and boring, and one star (*), God forbid, means, you might as well abandon your campaign now because this poster is costing you votes. Did any candidate get a one star rating this year among the hundreds of poster designs this year? Al Vann (D-BedStuy) came close. He took one and a half stars for a ridiculously strange poster that's currently on display near Woodhull Hospital. If you're near the Flushing J this weekend, go take a look.
Onto the flyers! Miguel's responses are itallicized. Our scores are averaged. 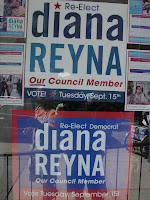 Miguel and I disagreed on these two. I thought Reyna's white poster was simple and effective and I liked Gerry's liberal use of red which you rarely see in political posters. There's also the subtle tag line at the end, "He's already doing the work of our councilmember," for those paying attention. 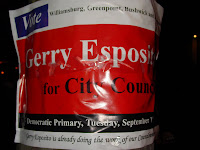 Gerry and Reyna were both very boring. Here's our boring name and our boring font. It looks like they didn't hire graphic designers. The font treatment was not that interesting. In the Diana window off to the side, there's a picture of a smaller image with two women hugging and that is a more effective poster.

I thought this was a fantastic idea but poorly designed poster (and poorly scheduled event, which took place the same time as the Community Board 1 Broaday Triangle vote).
Two stars, but funny. It's pretty awesome but I wouldn't vote on him based on this. You're a nerd. 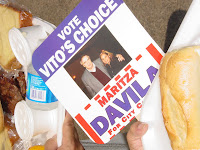 Pretty damn blunt isn't it. At least "Davila" is the largest font size in the poster, and who doesn't love the site of a flock of seniors waving these things around while waiting for the G-train to arrive? It's a lot cheaper than putting air conditioning down there.
That's a fan?

I wasn't crazy with these two at first glance because I don't typically like faces on political posters, but Miguel convinced me and on second look I see what he means. Thies probably has the best font I have seen used in the campaign. Very modern, thin, and cool, and it offsets the fact that he looks like Ricky Gervais in The Office. Simon also has good use of white space with a friendly font and soft blue and red colors.
I liked Simon a lot. I liked how simple it was and basic. It 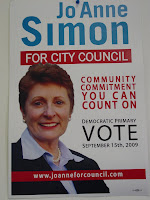 incorporates a nice information structure. Your eye is naturally moved in a certain way and inforporating the photograph really helped. It humanizes it more. I like the information and structure of the Thies flyer. The font was really pleasant and I thought including a photograph was a good idea. Having a name to a face works. You know who to throw a tomato at. 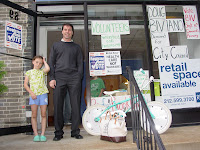 We're into the meatier stuff now. While Doug's flyers can be busy, I was charmed with all the hand-painted signs done by members of the Biviano clan and nearby children. Even The Real Deal wrote about it. Take a bow, Doug. You deserve it.

****Steve Levin's Hasidic Ballot Box
I first saw this on my way to a Make the Road New York event on Lee Avenue. Even though 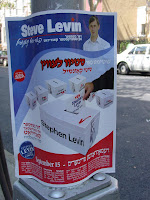 I was running late, I had to stop and take a photograph. Whoever did this is a professional. You've got Steve Levin wearing a kippot, an image instructing you to put your vote in a ballot box, and a whole lot of Hebrew text. Zey gezunt!
I liked that it is dynamic and bilingual. That's important. It's telling you that you can vote. Put a vote in the box. That's an effective piece of marketing. The little boxes in the back look like driedels. Also, he's kind of cute. I'll go for that. 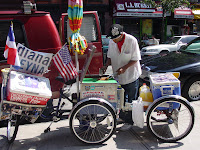 Diana Reyna's poster on its own got 2 1/2 stars from us, but when you add them to a guy selling fried pork skins out of a tricycle, throw the whole ballot out. We're doing a recount. The Chicharron man and his unyielding support for Diana Reyna's re-election campaign is rumored to be featured in three newspapers next week. Miguel was duly impressed.
I like slanging pork and politics.
Posted by Aaron Short at 6:09 PM

Hey Aaron, it's Erica, from the office...just an FYI, re: "Steve Levin's Hasidic Ballot Box" -- it's in Yiddish, not Hebrew, and reads (on top): "Der bester (the best) un shtarkster (and strongest) kandidat far City Council."

It continues: "Stimt (vote) far Steve Levin, City Council," and in the white text against the red backgrounds, it reads: "Demokratishe Primarim" and goes on, in the smaller print, to talk about affordable housing, social services, and zikherheit, whatever that is.

Oy, my eyes are hurting now.