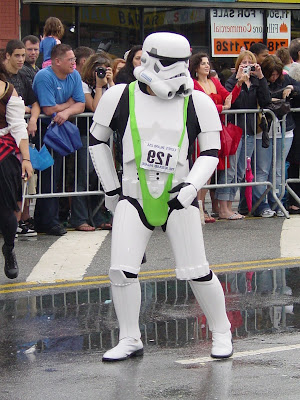 Brooklyn author Paul Auster preps for the Brooklyn Book Festival.
Ahhhhh, the Democratic primary will be over in a matter of days (4) and we can all relax after that, but this weekend brings a literary and artistic respite in the form of two exciting exhibits in Brooklyn: the Brooklyn Book Festival (Sunday 10 AM-4 PM) and the Brooklyn Artillery at Castle Braid (Saturday 4-10 PM). Both events launch an unofficial kickoff to autumn and... We interrupt this regularly scheduled blogpost of The Short List to bring you breaking news from Montague Street where DENNIS KUCINICH is on the steps of Doug Biviano Headquarters announcing his endorsement...!! 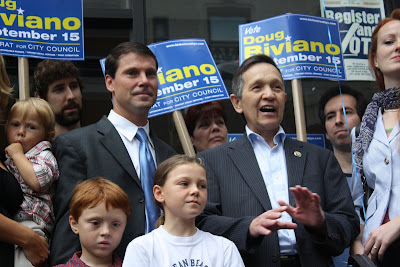 “We need leaders to emerge at the local level that are not afraid to stand up on issues like healthcare reform and force that dialogue. Doug is the kind of strong voice we need in government, and he will be an independent public servant that the people of Brooklyn can be proud of. I strongly urge the voters of the 33rd District to get out and support Doug Biviano in Tuesday’s Primary Election,” said Kucinich

Big day for the Biviano campaign. Biviano said he was "humbled" by the endorsement and added a few thoughts:
“Working for Dennis’ campaign last year was an awesome experience for me because I’ve always admired his willingness to take a stand against special interests and lead on so many important issues,” said Biviano. “Now to have his support in my fight to reform the culture of corruption that has plagued our City Council is just a tremendous honor.”
I unfortunately overslept and missed this. More unfortunately, I was not able to be there to snap a photo of Dennis and Doug at street level. I bet another reporter that two Dennises would not be as tall as Doug. We'll have to wait for other photos to come in to confirm this.

Meanwhile, the party keeps on going around the district this weekend, as candidates are hitting 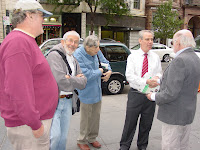 churches this weekend (I spotted Steve Levin, Maritza Davila, and Diana Reyna at Transfiguration in Williamsburg for the 9/11 memorial mass Friday night), doing some last minute flyering, and bowling alone. Yes, Evan Thies will be celebrating his 30th birthday with a few of his closest friends, campaign volunteers, and helper elves at The Gutter. Remember, nobody f#cks with the Helper Elves.

I've been posting lots of stories about TransGas (Samuel Newhouse breaks it down), the Broadway Triangle lawsuit (Gersh with a comprehensive piece), and the campaigns (from Gotham Gazette, a solid overview, but read BushwickBK.com's profiles too) in the past week, but there has been some other news in Williamsburg to keep your eye on too. This morning, there's 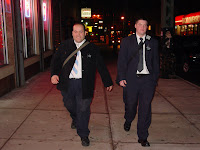 breaking news from Williamsburg regarding a vehicular homicide, the Knitting Factory opened this week, some more restaurants opened too, Mormons clean up McCarren Park on Saturday while Michael Jackson fans formed their own religion Friday night, an awesome car show that I missed went down last weekend, and Custom Wine Bar is going back to the drawing board.

In Greenpoint, Polish food is still cheap, plentiful, and abundant, a food market opens this weekend (and guess who's running it? Yup, Joann Kim), the Gazette profiles lots of candidates in the 33rd district, Beer week is here!, and add District Manager to the list of people upset about odors along Newtown Creek. I'll have an interesting piece about stimulus money, sludge waste, and affordable housing next week, so look for that too.

And Bushwick has a closer look at the campaigns, food news from Heritage Radio live in Bushwick!, the Harbor School's impending move to Governors Island, and a preview about CAPITAL B's latest project in Maria Hernandez Park.

We'll have a comprehensive Election Day preview Monday, so brave the rain, check out the book fair, where Linderman will be busy hounding Paul Auster for an interview and I'll be challenging Jonathan Lethem to a falafel eating contest. I can eat 25 in ten minutes Jonathan. What you got, Fortress of Solitude? (Updated, I pussed out and did not challenge Jonathan, but now I have my sights set on Colson Whitehead and a stack of Peter Pan donuts. Whatcha got Sag Harbor?)
Posted by Aaron Short at 3:32 PM

You gonna man up and get hot sauce on those 25 falafels, AS?