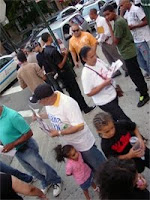 This polling station should be one of the highest turnout locations in the district and it’s in the heart of the Dominican South Side. The place is teeming with Reyna and Davila volunteers. Rob Solano stops by handing water bottles out to Reyna volunteers, right in front of some thirsty Davila supporters. That’s how it is on the South Side.

According to Ramon Peguero, a Reyna supporter and the Deputy Administrator of Los Sures, there have been 700 voters in the site already, and they expect 900 by 9 PM. That’s higher than in Ridgewood, where a source notes 520 total votes at a site out there. A Davila volunteer says she has been at Lindsay Houses for much of the day, while a Reyna volunteer adds that she has been making the rounds to PS 250, JS 50 and schools in Bushwick. The volunteers are clumped together, and have been gently needling each other.

“Vito has staked his reputation on this race. He says Maritza is Vito’s choice,” says a Reyna volunteer. “We don’t say that this is Nydia’s campaign.”

It’s been a long day. Less than two hours until the polls close. I ask the Davila volunteer how many hours of sleep he had last night.