Question: What do Russell Simmons and Chuck Schumer have in common?
Answer: They both endorsed David Yassky.

In the midst of the hullabalo of two major hearings, a Broadway Triangle lawsuit, the final blurry week of City Council/ Comptroller/ Public Advocate primaries, the first fall meetings of Community Boards, Precincts, and Education Councils, the first day of school, 9/11 memorials, Fashion Week kickoffs, the start of the NFL and college football seasons, and the Night Assemblymember Joe Lelntol Saved Christmas, Councilmember David Yassky brought out two big endorsements from the original Boyz' in da Hood that no one noticed. 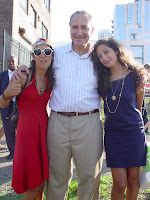 Two weeks after the Times' endorsment and a full month after he endorsed Steve Levin for City Council, Senator Chuck Schumer, right, gave his blessing to David Yassky's Comptroller run.

On top of that, Rockefeller Drug Reform advocate Russell Simmons chimed in too. Here's his reason:

"While I typically don't endorse in local elections, this race is too important to sit out. We all owe it to the future of New York to ensure that we have progressive individuals in local office, particularly in an office as important as City Comptroller. I found Councilman Yassky to be sincere and I look forward to working with him to advance the causes of our youth and poor New Yorkers in the years ahead."

I think it's because David is angling for a guest vocal spot with RUN DMC. Oooh, whatcha gonna do? That's really why David's been running for Comptroller. We've figured it out.