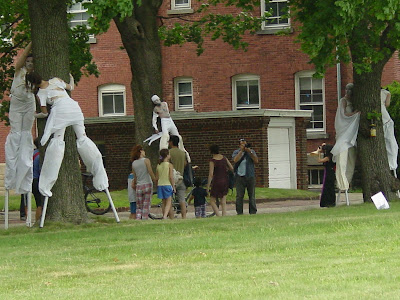 Because what we need in New York is more hippie tree huggers. Fortunately they've been quarantined on an island for the weekend. Governor's Island. Let's go to the tape.

*Tip of the cap to Ben Chapman and his action Daily News Team who uncovered not one, but two scandals at the Grand Street campus. Staff from Progress High School went on a swanky professional development conference and the School of Legal Studies just returned from their own luxury junket in shades of "Caucus, caucus, caucus!" frustrating teachers grappling with severe budget cuts.

*Meanwhile, Chapman uncovered that students from Legal Studies have instituted their own fight club, promoting boxing matches after school and posting videos to youtube. Are they getting afterschool credit for this? If the bill for ultimate fighting gets out of the Ways and Means Committee this week, this could become a legitimate for-profit after school club. Nicely done Mr. Champan.

*The Greenpoint Food Market is closing, but not because of anything the city did. In fact, market 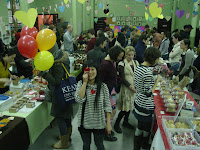 organizer Joann Kim is postponing her June 26 market in favor of a "Think Tank" summit. My proposal for the "Greenpoint Food and Beer Summit" title was shot down, but Kim will be inviting representatives from the Health Department, Small Business, and Councilman Steve Levin, to talk about city rules and regulations and food industry professionals such as Harry Rosenblum from the Meat Hook, Robicelli's Allison Robicelli, Joshua Kace of Slantshack Jerky, and others to talk about how to launch a business in the industry. For much more, visit http://greenpointfoodmarket.wordpress.com/

*A BP station in Williamsburg to vandalized. On Shabbos. That pretty much rules out a Hasidic suspect, right?

*Brownstoner looks at a building on Kent that is going nowhere.

*Bill Murray wanders into a poetry walk on the Brooklyn Bridge.

*11211 writes about an old city health clinic on N. First Street and how 400 Bedford may be occupied.

*More art, as the Downtown Star looks at Willoughby Windows, and some architecture, as Brown Memorial Church looks towards plans to grow.

*Finally, the State Assembly and the State Senate passed Loft Laws. What does it all mean? We don't know yet (look for an article soon). In the meantime, check out BushwickBK's Jeremy Sapienza's take on the laws in Bushwick and Eliot Brown's take from the Observer, which will no doubt enable more performances like the one below: