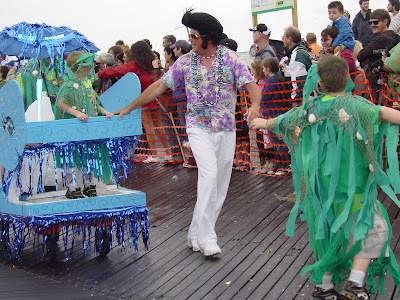 Even Elvis may make his final appearance at Saturday's Mermaid parade.

It's a jam packed weekend. No two ways about this. From the Mermaid Parade on Coney Island to the opening of the summer concert series at East River State Park. There's no way to make everything and I'm not going to even try. Still, there's a lot to check in on, so here's a quick list of highlights if you want to find something else to do now that the NBA finals are over.

*Crest Fest! at the Metropolitan Avenue hardware institution at noon until whenever the 9-0 shuts the place down.
*Fishy hipsters swarm Surf Avenue for six hours giving die hipster enough to write about for the next two weeks. 2 PM
*Amanda Browder's fabric art sculpture unveiling is finally complete. Saturday 3 pm 1066 Manhattan Ave
*District Attorney Hynes and a group of reformed felons will be cleaning up garbage at 2pm on N. 15th Street. Come help them!
*El Puente springtime showcase. Come see the future Latino stars of Broadway today! 2-4 pm Saturday at S.4th and Roebling.
*Moviehouse's Chris Henderson is having a party/ barbecue at 2 pm somewhere on Jefferson Street. Just look for the police.
*Jason Andrew is organizing a Dance Performance Series on a rooftop in Bushwick, this Saturday, June 19 @ 7:30PM. I think it's at 330 Meserole Street.
*The Brooklyn Salsa Company is celebrating its launch with a party at 929 Broadway at 8 pm. This stuff's made in New York City. NEW YORK CITY!
*Linderman is getting brunch with the rents at Enids 12 pm Sunday. Better push that to 1.
*Band of Horses and Grizzly Bear, featuring Senator Chuck Schumer open the East River concert series. This is a paid, not free, event. So expect lots of hangers on along the edges of the waterfront. Did I mention that the Northside Pier is open? 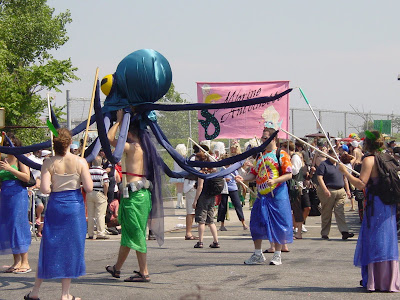 An octopus puppet is taken out of the Mermaid Parade because it is covered in BP oil.
Posted by Aaron Short at 4:21 PM