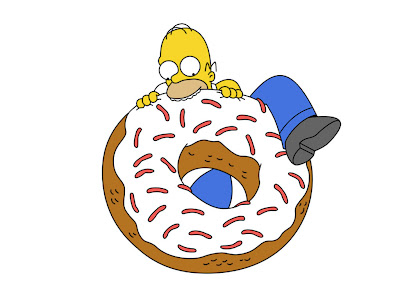 Ed Towns strikes it rich again, with the Press Release of the Week. This time it's about donut holes, but not the ones you think.
Rep. Towns Announces That “Donut Hole” Checks Are
Now On Their Way to Tens of Thousands of SeniorsHealth Reform Law Will Help About 4 Million Seniors To Receive
$250 Checks Over Next Several Months

Washington, D.C. – Today, Rep. Edolphus " Ed" Towns announced that, starting today, Medicare will begin mailing out to tens of thousands of seniors $250 ‘donut hole’ checks. Under the recently enacted health reform law, seniors who fall in the donut hole coverage gap in 2010 will receive this one-time tax-free $250 rebate check. These checks will continue to be mailed monthly over the next several months as seniors enter the coverage gap.

The checks are just the first benefit from health reform for seniors in the Medicare Prescription Drug program. Beginning in January 2011, seniors in the donut hole will receive a 50% discount on brand name drugs. By 2020, the donut hole will be completely closed.
“Prescription drugs cost many people thousands of dollars a year and this check is a down payment on reducing prescription drug costs for seniors and eventually closing the donut hole altogether,” Rep. Towns said. “This is the first example of how the health care reform bill will strengthen Medicare and help seniors.”

Congressional Republicans created the donut hole – leaving thousands of seniors to choose between buying the prescriptions they need and putting food on the table – and now they refuse to help close it. The ‘donut hole’ coverage gap is the period in the prescription drug benefit (once their prescription drug costs exceed $2,830) in which the beneficiary pays 100 percent of the cost of their drugs until they hit the catastrophic coverage threshold.

Last year, roughly 246,000 Medicare beneficiaries in our state of New York fell in the donut hole and received no extra help to defray the cost of their prescription drugs. Now, under health reform, help is on the way.

Medicare recipients don’t have to do anything to get the $250 check – once their drug costs for the year hit $2,830 the one-time check will be issued automatically. But Rep. Towns warned seniors to be on the lookout for fraud.

· Provides free preventive care services under Medicare, beginning in 2011.
· Strengthens Medicare by extending its solvency by an additional 12 years, from 2017 to 2029.
· Improves seniors’ access to doctors.
· Continues to reduce waste, fraud and abuse.
· Improves care by helping doctors communicate and coordinate.
· Expands home and community-based services to keep seniors in their home, instead of in nursing homes.

“Congressional Republicans calling for health reform repeal oppose this progress for seniors, and would return us to a system of higher drug costs, shrinking benefits, and insecurity for our seniors,” said Rep. Towns. “They would protect insurance company profits at the expense of the care our seniors need and deserve. Democrats in Congress won’t let that happen.”
Posted by Aaron Short at 1:19 PM