Community Board 1: The end of the Wardynasty 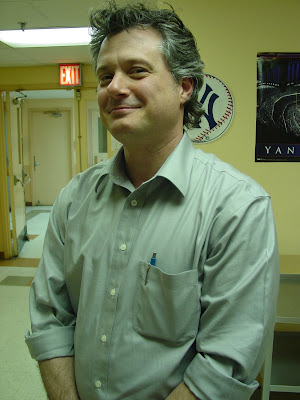 Before we pause to reflect the end of an era, let’s take a look at the scene outside the Swinging Sixties Center, where Community Board 1 is about to have the last meeting of the year. It is petition season, which means that Lincoln Restler, a candidate for Democratic District Leader (read Juliet's profile if you missed it) is greeting board members one-by-one as they enter the Center and asking them for signatures. I arrive just in time to see Rabbi David Niederman and Lincoln promise to call each other.

Inside an inexplicably chilly room (the AC is ON!), current District Leader Steve Cohn has turned up the schmooze levels to 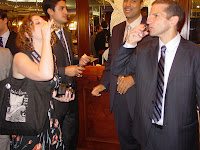 eleven, introducing board members to his son, Warren, who is also running for District Leader after the elder Cohn announced he would step down two weeks ago. Elder Cohn reminds Press Row that the Seneca Club annual dinner is coming up Thursday and we're invited to attend (provided we work it). Drinks on the machine?

6:43 PM: District Manager Gerry Esposito takes the roll before handing the mic to Ed Towns Liaison Jonathan Noble, who talks about the new HPD office. I grab the Cohns for a couple of prom photos on the steps of the Swinging Sixties Senior Center. Meanwhile, the Chairman Emeritus arrives. Nice to see him in good spirits.

Noble exits and we get to the fitness center on 16 Eckford Street, the first of three items. The gym has a BSA application awaiting community board approval even though they opened on June 1. No one has any questions.

We have three sidewalk café applications, including a renewal requested by Bedford Avenue’s DuMont Burger, makers of the best burgers in Williamsburg. This doesn’t seem to be a problem as if there’s one thing that a diverse community board 1 likes, it’s burgers.

Item number three is a rep from New York City Transit and the Department of Transportation to talk about bus rapid transit on the B44 bus on Nostrand Avenue. This touches a tiny portion of the district near Bedford Avenue and Nostrand Avenue and follows the success of rapid transit on Fordham Road in the Bronx. Fun fact! Did you know that buses are in motion only 45 percent of the time and the rest of the time it is either stopped for traffic, for a red light, or for passenger discharge? You did? Let’s move on.

7:12 PM: Everyone’s trying to squeeze their transit questions into the next five minutes after they realized that a live body from New York City Transit. Rob Solano asks about express service on the M train, Rabbi Niederman asks about traffic, Heather Roslund asks three questions about metrocard machines, and another member asks if there are any plans to link Williamsburg to Manhattan with a bus over the Williamsburg Bridge, since the B39 bus which does this is getting cut later this month.
Transit guy: "At this time there are no such plans."
Board member: "Is it possible to make plans?"
Transit guy: "We're all hopeful that the economy gets better and services will change."

"The thing you take home tonight is this is a service that will dramatically improve bus service on the Nostrand Avenue-Bedford Avenue corridor, it is about two years away, and it is partially federally funded. This will be an exciting project that everyone will get on board." And it will run a lot faster once they get Keanu Reeves on board.

7:32 PM: We're inaugurating five new board members. For those keeping at home, that's two new Hasids (Moishe Zelik and Moishe Kahan) and two new Latino board members (Will Florentino and David Lopez). I pull Jon Noble aside to find out what's going on in the world of Ed Towns. Jon says Ed is supporting Warren over Lincoln and that he's trying to get his wife to come to the Seneca Club meeting on Thursday. Everybody put pressure on Jon's wife!

7:34 PM: Chairman Chris is imploring board members to send in committee reports several days in advance and the obligatory plug to attend more meetings. Sitting on Press Row, Open Space Alliance's Julia Morrow appears to be engrossed in her homework, developing a media plan, or something.
Julia: I've got important things to do Aaron. I just turned the lights on at the field and rode my back here in 15 minutes. How do you like me now!

Chairman Chris is starting to break a sweat talking about Charter Revision and the history of the 197a plan, the rezoning of the Williamsburg waterfront. He's got a resolution to call on the Charter Revision Commission to "reform fair share and 197a" and "put it on the ballot." It is unanimously approved. Chairman Chris thanks his colleagues, but cautions that "we must look more and more poignantly at the process as a whole," and references the Greenpoint Oil Spill in relation to the BP oil spill, because "we're one of the only communities in the country that understands what this means."
"I just want to wish everyone a great summer. Enjoy yourselves." Applause.

7:53 PM: That's it! No, that's not it. Committee reports. A moment of silence for Ward Dennis the Land Use Menace.
Ward explains two items, the Department of Sanitation's request to renew its garbage truck garage on 525 Johnson Avenue and a city zoning request on car sharing, making it easier to allow car sharing in city garages. Both pass easily.

8:00 PM It's election time. No, not that election. Executive Committee elections.
Rabbi David Niederman congratulates Ward Dennis for his efforts on behalf of the city. More applause. Now we're in the voting. Heather Roslund, aka the New Ward,
Chairman Chris notes taht this meeting marks the 33rd year that DM Gerry Esposito has been working at CB1.
"Very few district managers have show this kind of dedication that Gerry has shown to his community," says Chairman Chris. Applause and some audible gasps.

Ward takes the mike again, thanking board members for their support.
"Back to the car sharing text amendment..."
No, back to Ward. He's among the most knowledgeable land use and housing representatives that the board has had and it is lucky to have him. He's not going anywhere though, as Chairman Chris reminds us, he's just going to run Neighbors Allied for Good Growth in the meantime. Let's play that Rude Boy out with some Rihanna.

8:06 PM: Del Teague takes the mic to talk about budgets which turns into a long and meandering report about the GREC letter which did not end up getting GREC the Greenpoint Hospital RFP. Meanwhile NAG's Allison Davis peaces out of here before I can ask her whether her mom's house in Florida has any BP oil on it yet.
The Chairman Emeritus leaves too, saying that it has been voted upon already and he doesn't understand why people are still arguing about this. Chairman Chris says this should have been handled in committee and Del backtracks, saying this isn't controversial. Still, it is taking twenty minutes longer than it should.
We've got a sports update. What do Community Board 1 and Stephen Strasburg have in common? Both have eight strikeouts so far tonight.

8:31 PM Karen Nieves gives the Transportation report, starting with the Kosciouszko Bridge update and some new outreach with the 94th Precinct and Transportation Alternatives with ane enforcement plan (think checkpoints, safety guides for riders, more studies) to make McGuiness Avenue safer. You're going to be hearing a lot more about this. Snaps for Karen.
Finally, the next meeting will feature the DOT's plan to resurface the Greenpoint Avenue Bridge, and Karen needs more participation from board members. C'mon, people, show Karen some love. It's the Karen Nieves era after all.

8:37 PM: Steve Levin arrives, although he actually arrived at 8:04 PM. He was just talking to the Chairman Emeritus outside the Swinging Sixties Center about the War. The Great War. Steve comes inside and has a few words:
"As many people are aware, the project was voted out of City Planning yesterday and it did not incorporate many of CB1's suggestions. Our office along with Assemblyman Lopez and Assemblyman Lentol will host a town hall meeting next Thursday, June 17... I want to make sure that we get everyone's voices heard. The hearing before the zoning subcommittee is the last time to have your voices known. I think everyone knows my take on the project and I share CB1's recommendations straight down the line."
Steve mentions that a town hall meeting will be starting for McGuinness Boulevard.
The real reason I raced back up here is to recognize our outgoing Land Use Chair Ward Dennis. I want to recognize what he has done over the past few years. He is universally respected... he has brought a dignity and a real level of respect. His successor has big shoes to fill. Actually, he's not really going anywhere."
Jesus. Is Ward dying?
Also, what else is happening on June 17? Oh right, Greenpoint Gazette Publisher Jeff Mann's wedding. Guess the Assemblymembers aren't coming.

8:45 PM: Alcohol Committee Assistant Vice Chairman Tom Burrows reads the list of liquor licenses to be approved including Calexico and Crif Dogs. All eight get approved. Next are the renewals. They're approved too. Tom mentions The Woods, which folded its application for a backyard bar, and it is not approved.

*Julia Morrow has lots of Parks updates for OSA. There's free yoga on the northern part of McCarren Park, there's a skate clinic at the skate park, there's Make Music New York in six parks on June 21, L Magazine is bringing free movies back to McCarren on July, the Northside Festival returns on June 26 and 27th, the N. Fifth Pier is open for public access, Transmitter Park is in construction, OSA has hired two maintenance workers to clean the bathrooms, and OSA is looking for more volunteers for plantings, outrage, and whatever else is needed.

*James from Trophy Bar wants to introduce himself. "We would rather hear directly about concerns from our neighbors rather than from the newspaper."

Julia: That was super fun guys! It sure was. We'll see you in September.
Posted by Aaron Short at 6:54 PM

Gerry Esposito is burnt out and bitter. Time to retire.

It sounds too much like Dentistry, and that' snot really fair to Ward. Also, Gerry is neither burnt out nor bitter, and he's still chugging along. Keep it nice here folks.

I actually thought Land Use Menace was your best effort to date. And it was Weber, not Niederman - keep your rabbis straight.