Pour Some Sugar on Me... in the name of redevelopment 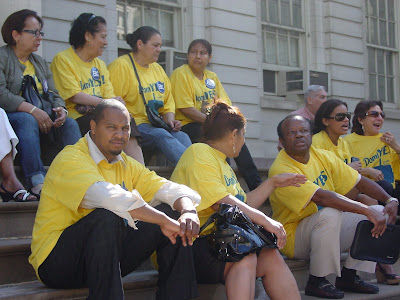 It's supposed to be 94 degrees today, but only Susan Pollock and Michael Lappin knows how hot it will be at the witness stand in City Council chambers. What's the temperature that sugar melts?
This morning, City Council finally takes up the redevelopment of the Domino Sugar refinery during a zoning hearing. The dueling press rallies on the steps of City Hall are a nice frame for the debate, but the key aspect to watch is Steve Levin's line of questioning for Susan Pollock and whether other councilmembers give any hints to their position during the hearing.
So many other questions to ask. Will Vito Lopez, who is expected to testify, steal Steve's thunder and will Steve let him? Will Rob Solano text me in the middle of Steve Levin's Q and A with a ridiculous PR request? Will Ward Dennis wet himself?
I, personally can't wait until Johnny Depp weighs in on this. He's on after Vito.