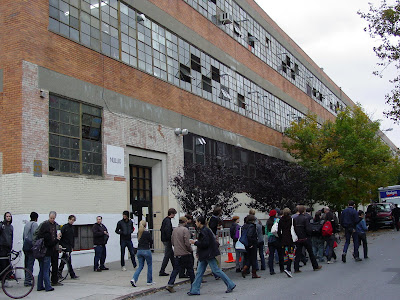 Make no mistake, the Loft Law's passage has the potential to be the biggest thing to hit Williamsbrg, Greenpoint and Bushwick since the 2005 waterfront rezoning.

There's going to be a lot of shake out as tenant advocates, artists, industrial businesses, immigration groups, and political observers break down the consequences of the Loft Law's passage. Here's an early response from Housing Here and Now's Michael McKee, which was forwarded from Vito's office. I'll have an industry response shortly:

Thanks to everyone who called, faxed or emailed Governor David Paterson, who last night signed the Loft Law extender/expander. The bill is now Chapter 135 of the Laws of 2010.
There is a three-way agreement that the Legislature will pass a chapter amendment in the next few days. This was a deal made shortly before midnight after hours of negotiations with the Bloombucks administration, which at the last minute had asked the Governor to veto the bill.

While not all details of the chapter amendment are known yet (more detail later), the Legislature agreed to raise coverage from buildings with two illegal residential units to three units. They also agreed to make Quick Draw, the video lottery game renewal of which has been linked with Loft Law extenders since the Pataki administration, permanent.

Chapter 135 makes the Loft Law permanent – without a “sunset” clause – thus freeing loft tenants of the uncertainty of sweating out whether the law will be extended for another period of time. The other major change in Chapter 135 is to expand coverage to newer buildings. Under the original Loft Law, only tenants who have been in occupancy since 1981 (a year before enactment of the law)were protected.

The new law will bring rent and eviction protections to tenants who can prove residential occupancy for 12 months or more in 2008 and 2009. Without this change, these tenants would have continued to be subject to arbitrary eviction and arbitrary rent gouging.

These buildings now must go through a process of legalization, bringing them up to fire and safety code standards. Upon completion of this work the apartments will become subject to rent stabilization.

Thanks go to Assembly Housing Chair Vito Lopez and Senator Martin Dilan for their efforts to enact this new law.

And congratulations to Lower Manhattan Loft Tenants (now a city-wide organization despite its name) for a terrific job of navigating the murky waters of Planet Albany, and to the newly protected tenants who mounted a successful lobbying campaign.
Posted by Aaron Short at 6:20 PM