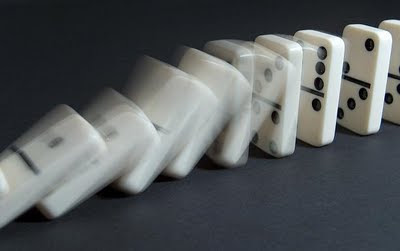 Another domino indeed fell this afternoon, as City Planning voted to push through the plan to rezone 11 acres of the Williamsburg waterfront. The hearing was pretty cut and dry, and it was all done in about half an hour. Next comes a City Council subcommittee hearing, where Steve Levin will attempt to shave a few hundred units from the project. This won't be as easy as Rose Plaza, as the words "Speaker Quinn" "balls" and "vice clamp" have been uttered to me by a couple of knowledgeable sources.
I know, I know, I'm very behind posting links, round-ups, shout outs, etc. Please forgive me. It was Bushwock Open Studios! Hell, even the commenters last week have been wittier than the blog posts and when have you seen that happen?
We'll start bringing it again this week, kicking off tomorrow's last CB1 board meeting of the summer. Mieszko might be out of town, but it's Ward's last one as Land Use Chairman. Do not try to put Ward on a flaming raft and push him into the middle of Newtown Creek. It doesn't have to end like this. 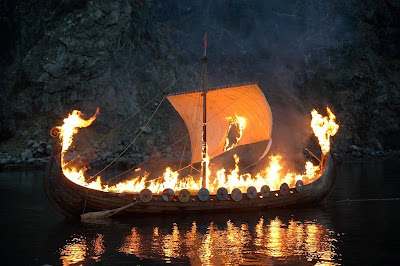 P.S. The blogfest is tomorrow night as well, which means I'm going to have to crash the after party. It's at the Brooklyn Lyceum. A word on blogging and reporting from someone who does a little of both. Why is it when a blogger cuts and pastes an article directly from a newspaper without crediting it properly it is called "linking" but when a reporter independently verifies a story a blogger brought to light (say, without even looking at a blogger's website), it is called "poaching." Not that I do either. This, by the way, is proper poaching technique:
Posted by Aaron Short at 6:10 PM