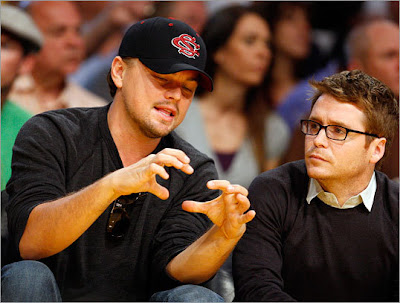 Photo by Jim Davis, Boston Globe
"You see, 'E', I think Ward's legacy as head of the Land Use Committee has been to get to the heart of the matter of every complex rezoning proposal."

Last year around this time, it was Broadway Triangle madness (aka "Shut it down! Shut it down!") that blew out the meeting and frustrated most of the members in attendance.
Tonight it's going to be pretty brief. Ward steps down from CB1's Land Use Committee tonight, leading off a pretty dry meeting, topped off by a BSA from a new gym on Eckford Street which has Miss Heather pretty excited. I'll get to the gossip tomorrow, but here's an overdue list of links to pick through.

*The New York Times strikes again, profiling The Yard and how awesome it is. Unfortunately, it has now been shut down. The Greenpoint Food Market is now very very worried.

*Speaking of cool things closing/ reinventing themselves, Mimi Luse goes behind the closure of the Market Hotel to detail Todd P's plans in a piece for The Brooklyn Rail. It's one of the better Todd P pieces out there.

*Bushwick Open Studios, which featured 314 open studios this weekend, is over. The highlights? Stephen Truax at BushwickBK has it covered.

*CB1 member Esteban Duran is running for Male District Leader in the 53rd, against Vito Lopez, who is also a state legislator of some note. He held his first fundraiser at Ooba, winner of the Brooklyn Paper's smackdown earlier this year, with Barbara Medina, running for the female slot.

*Also declaring this week in the 50th with Lincoln Restler was Kate Zidar, a Pratt professor and one of an ever rotating number of Lacey Tauber's best friends.

*Speaking of The Restler, the Fort Greene Local/NYTimes profiled him on their Local blog. Because Lincoln is Local. That's not a bad slogan is it? It certainly beats, Restle the Machine.

*As for CBID, IND and WTF, themole has his rundown of the endorsements. When Lincoln and the Mole meet in person, I have a feeling it's going to go something like this...


*Finally, Tom Tracy has a crazy story from Marco Polo Restaurant in Carroll Gardens that must have looked like a cross between The Godfather and Cops. Wait... isn't there another show this reminds me of? Oh right.

I once spent a lovely 2 weeks as Lacey Tauber's best friend. Magical.