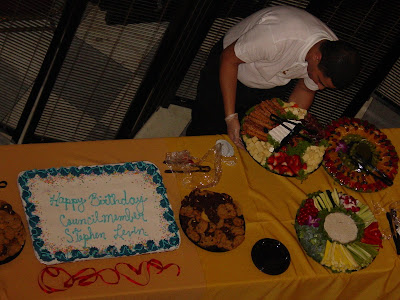 Two weeks ago, Steve Levin was unofficially inaugurated at Brooklyn Borough Hall. This was not an official swearing-in, but more of a private ceremonial celebration. Still, it was a party, and the Greenpoint Gazette's Juliet Linderman was there. Here's her report.
An excerpt:

One of the evening’s most distinguished guests, Assemblyman Vito Lopez—for whom Levin has served as chief of staff for several years—shared a few stories about Levin, including one about their first meeting, and gave an affectionate speech on behalf of Levin’s character, both during and outside of the work environment.
“There isn’t one person who has met Steve who doesn’t like him,” Lopez said. “There is something special about him.”
Posted by Aaron Short at 12:00 PM