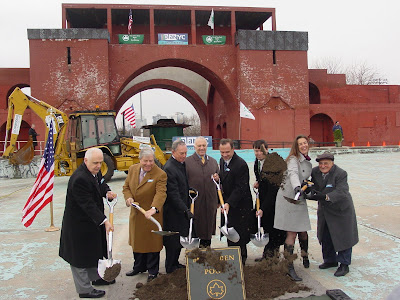 Nevermind that there was a mound of dirt in the middle of a concrete floor to symbolically represent the reopening of McCarren Pool. This groundbreaking was big deal, twenty five years in the making. It will cost the city $50 million to restore the pool, significantly more than the original restoration costs circa 1984 (closer to $15 million). For that kind of money, you'd think the Mayor might get the name of the place correct.

My favorite moment was when the Chairman Emeritus, below, thanked Mayor Bloomberg for the $50 million allocation for restoring the pool. The mayor promptly invited him to jump into the pool with him on the first day of summer 2012.
"Only if you send a lifeguard in after me," said the Chairman Emeritus. 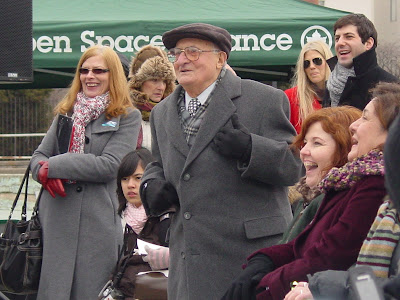 That's a really awesome photo, the second one.

Great photo and great title -- I liked the look on everyones' faces when Bloomberg said "McClarren," seven times -- reminds me of the one where the kid's fingers got stuck in the McClaren stroller and were cut off!! I hope they don't do a recall on the pool!