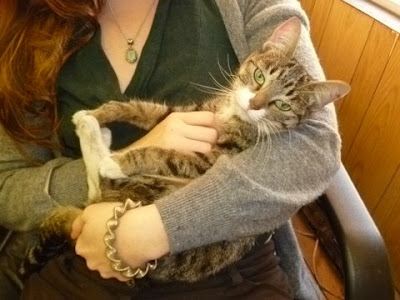 This comes to us courtesy of Assemblyman Joe Lentol's press girl Amy Cleary, who helped rescue a cat that was trapped in her office.

Yesterday, while Assemblyman Joe Lentol listened to new Governor Andrew Cuomo’s State of the State address, his staff was having an adventure of their own back at the district office in Williamsburg, Brooklyn. It started when communications director, Amy Cleary, noticed that you could hear a cat crying from the back of the office where the first floor store abuts on a small fenced parking lot. It was clear that the cat was in distress.

But there was no way to get into the parking lot because it was locked and the top of the fence had barbed wire. Cleary put out cat food which was left untouched and unsuccessfully rang doorbells of nearby buildings trying to find someone who had keys to the lot.

Then fate intervened on behalf of the trapped kitten. “Just when Amy was starting to get desperate, I looked outside and there was a fire truck and four firemen, they were on their lunch break and buying sandwiches at the Italian Deli across the street. It was such a lucky coincidence,” said JoAnn McErlean, Assemblyman Lentol’s executive assistant.

“I went outside and asked them when the last time they had saved a cat was. I told them it wasn’t up in a tree but it was definitely trapped,” said Cleary. “They climbed the fence to the parking like it was nothing! But it wasn’t long before we figured out that the cat wasn’t out in the parking lot. I convinced them to come in the office and listen for themselves to the meowing.”

All four fireman trooped through the office to the back where the cats cries could still be heard but much quieter than earlier in the morning. “I was so worried,” said Tish Cianciotta another Lentol staffer. “It was clear she was getting weak and tired, the firemen got here just in time.”

“They realized she must be in the wall, and started trying to figure out where in the wall she was, they took apart part of the wall in our bathroom and then went down to the basement with a ton of tools. I felt so bad, they were on their lunch breaks and all of their food was back in the truck getting cold. But they were great, they just kept at it, trying to get her out,” said Cleary.

“It was the most exciting thing we’ve had happen here in a while. They even mentioned bringing in infrared equipment but I think they were kidding,” said Emily Mijatovic, Lentol’s district office liaison.

The firemen finally had success by cutting a hole in the basement wall and coaxing the kitten out with food. She was a hungry girl and very dirty from her adventures in the wall. After posing for a pictures the firemen, who Lentol’s staff was pretty sure had now missed their entire lunch break and had to go straight back on duty, went back on their truck and headed back to the Firehouse 238 on Humboldt and McGuiness.

“I couldn’t believe it when I heard. She must have found a way to get into wall for warmth during the snowstorm and not known how to get out again. I want to thank the firemen from firehouse 238 for giving up their lunch hour to help a lost kitten. As an animal lover, this is the kind of story that warms your heart and gives you hope in the New Year,” said Lentol. “From what I hear the only one who was not excited about the rescue and new visitor, was our office cat Brooke, who is not happy unless she is the center of attention and did not enjoy a visit from another cat. But Brooke has forgiven us all, and has promised to continue her all important mousing job.”

The kitten, which could not have been more than six or eight months old, curled up in Cleary’s lap and went to sleep, purring.

“She ended up being such a sweetheart. She was really docile and just loved attention. She just purred and rolled around in my lap all afternoon while I worked. She was really dirty but once she has a bath she is going to be the most adorable, sweetest cat. I really wanted to take her home but I already have one,” said Cleary.

The newly rescued kitten is now at Brooklyn Animal Resource Coalition (BARC), a no kill animal shelter in North Williamsburg waiting to be adopted. Anyone interested is encouraged to visit the website at http://www.barcshelter.org/ , visit BARC 253 Wythe Ave. @ n. 1st street Brooklyn, NY 11211, or call 718-486-7489.
Posted by Aaron Short at 3:53 PM

Great story, thanks for sharing it.

This is sweet! Patches would not have been happy had you taken her home. Hope she's well and this cat must have been snatched up at BARC with all the press she got. :)