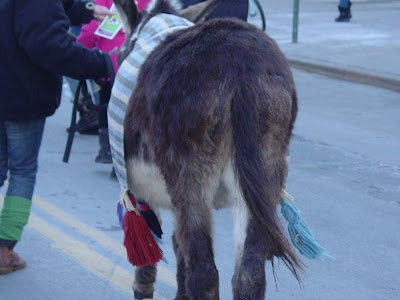 From assess to assess

If it's the first weekend in January, it must be time for the annual Three Kings Day Parade on 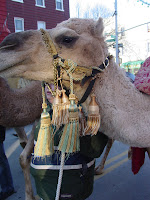 Graham Avenue. With temperatures dipping below freezing for much of the afternoon, crowds were sparse and tended to follow the livestock (three camels, two goats, a sheep, and one very furry donkey, above) as they trotted from Meeker Avenue to Broadway.
Usually there's a severely bundled-up middle school kid following the camels with a snow shovel that's taller than he is-- but I didn't see anyone performing that thankless task this year. It's just as well.

*Less than a day after receiving the cover nod at the Village Voice, Pablo Airaldi is free!
There's another solid profile at The Brooklyn Ink (which has been throwing down some decent stories as of late) -- unfortunately, the piece was published two days after Airaldi was released from the immigration detention center and does not update with any news of this. See how New York Shitty (and others) updated as soon as the news came out?

*Behold, the Aporkalypse is upon us!
The US Census might need to add another map to signify the high-end fast-food joints that have been clustering on Bedford Avenue and N. Seventh Street in recent months. So far this year, add Inoteca's mexican food, Crif Dogs's footlongs and The Meatball Shop are adding outposts.

*Whenever one rock venue closes-- another opens. The Ridgewood Masonic Temple is temporary closed and facing an uncertain future but a new rock venue is opening in an iconic former 19th century brewery.

*And just like that, Grand Street is the new West Village.

*The Times looks at how Downtown Brooklyn is becoming a neighborhood-- sort of.

*NBC's Brian Williams has a sense of humor but Mimi Sheraton apparently doesn't. 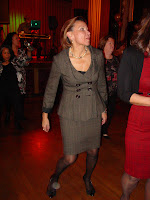 *I still don't understand this story from City Hall News.
Yes, Congresswoman Nydia Velazquez's power is likely diminished now that the Democrats are in the minority-- but how? And Lew Fidler is not the source to talk to on this. See how The Brooklyn Ink makes short work of it instead.

*What was Assemblyman Vito Lopez up to during the holidays? Why opening up a tattoo shop in Ventura County.

*And finally, new congressman Michael Grimm is taking his new health care policy that he earned-- after winning NBC's America's Got Talent. Because, when a maaaaaaaaan loves a womaaaaaaaaaaan...

This has been a very significant blog indeed. I’ve acquired a lot of helpful information from your article. Thank you for sharing such relevant topic with us. I really love all the great stuff you provide. Thanks again and keep it coming

Thanks for sharing these & very well explained post. Some thing new to learn from this helpful post.

Nice! I really enjoyed reading your post. Thanks for sharing and keep up the good work.