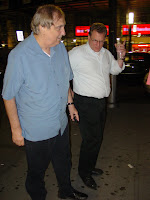 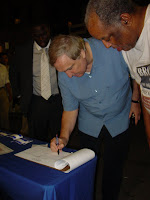 So there we were. 11:50 pm. Board of Elections office at 32-42 Broadway. Not a lot going on. Katie Cucco and Kevin Peter Carroll were there, contemplating whether to file challenges. Kevin's dad was there too, wearing an identical name tag and looking to drop someone for the fun of it. So was Sarah Baker from Lincoln Restler's campaign. 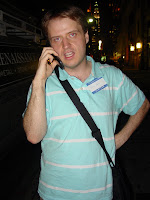 As for the actual electeds, Canarsie Councilman Lew Fidler was hanging out with Mill Basin Assemblyman Alan Maisel shooting the bullsh#t. Both of them ate earlier and neither had an opponent so they were in a good mood.
KPC on the other hand was pacing around the buildings nervously wondering whether his opponent Ralph Perfetto would show up and challenge his petition, breaking a Bay Ridge blood oath of some kind. In the end, KPC decided to challenge Ralph's petition. I don't know the details, but Tom Tracy and Helen Klein do, and there's more of it here.
Then Vito showed up and the fun began...

Team Vito delivered a stack of challenges (I still don't have the full list) to the petitions of rival candidates just before midnight. After he signed in, he kept asking if I was married. Married?
"Aaron Reyna," said Vito. "You know, Aaron Reyna."
Ohhhhhhhh, I get it. But that would make Councilwoman Diana Reyna's actual husband, an ex-sergeant in the NYPD and a semi-loyal reader of this blog, angry. And the last thing I want to do is make Peter angry. Let's just cut to some Clapton and get the hell out of here.

Message to Vito, GROW UP!