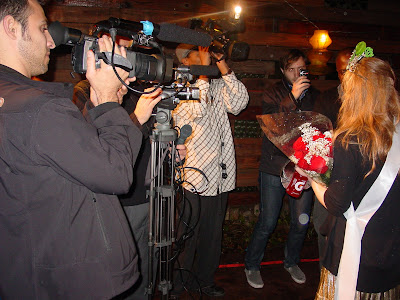 
It was a night to remember at the City Reliquary for the first annual Miss G Train competition. Nearly everyone had their own documentary film crew and Michael Freedman Schnapp's crew was filming the making of the making of the Miss G Train Pageant. Let's break down the numbers: Nineteen semifinalists. Six legitimate talents. Two genders. One oft-maligned transit system. Zero chance of scoring one of those green frosting cupcakes on the judges table. Oh and MFS, there actually is a real Miss Inner Beauty pageant. 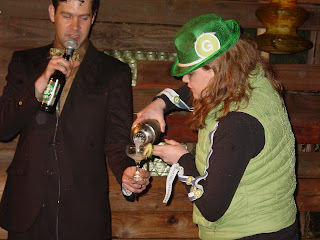 The winners! Forgive me, I get carried away in the details. Contestants showed off their vocal, dance, and bartending skills during the talent portion of the competition, but there could be only one winner. Local favorite Chelsea Tapper displayed tremendous Greenpoint spirit, Times Fort Greene blogger Anne Szustek lost and then went promptly back to work, 3rd runner up Marleah Martin displayed an impressive knowledge and verve for improving our transit system, and 2nd runner up Shane Thor had... um... tremendous upside potential... but there could only be one winner. Father John Powis, come on up here and get your plaque! 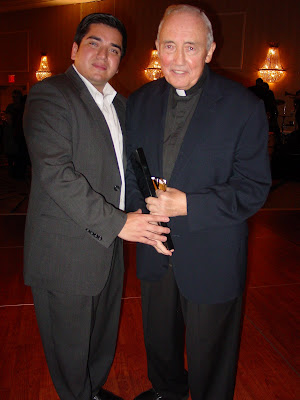 What a night for Father Powis! First he gets honored by Brooklyn Legal Services at their 41st annual pageant in downtown Brooklyn, and then comes all the way up to Williamsburg to take the Miss G Train crown of thorns. Amazing. 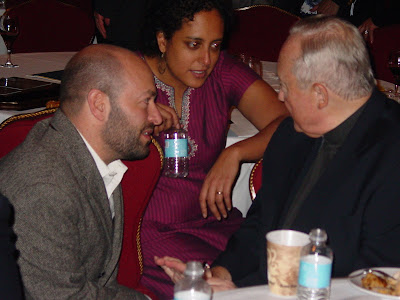 Make the Road's Oona Chatterjee and Andrew Friedman congratulate Father Powis
Actually, no, I'm getting my events confused. If you must know the winners, check out the video below.

Of course it wasn't all just pageantry and legal intrigue. There was a City Council subcommittee hearing on the Broadway Triangle where Al Vann's goatee stole the show, a major cocaine bust in Williamsburg on Thursday where $1 million worth of cocaine was found in a portable sauna, which is more secure but less efficient than kielbasa, anti-semitic stickers in Greenpoint (New York Shitty has a photo diary too), there's another Atlantic Yards lawsuit coming and more questions as the financing deadline looms, WNYC looks at Puerto Rican culture and politics in Bushwick, and sexy shop SHAG is open for your business. 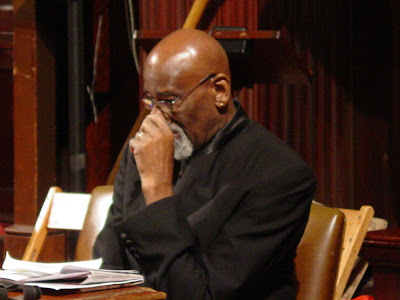 The Short List learned its lesson. Do not lay ten points against Al Vann's goatee in a general election contest. He will destroy you.
As for the weekend, the best bet is the SCORE swap at 3rd Ward from 1 to 7 PM brought to you by the dependably delightful MeanRed Productions and a bike rack construction project on Sunday at the Change You Want To See on Havemeyer Street. And don't forget SmART Brooklyn, the borough-wide gallery hop sponsored by the Borough President's office and Brooklyn Tourism, as well as stopping by Famous Accountants from 4-7 PM on Sunday for their closing show. It's the same time as Pats-Jets, so I'll make it easy for you. Pats 61, Jets 3. See you at Famous Accountants.

Finally, congratulations to The Brooklyn Paper for their 30th Anniversary edition. Hard to believe they've been around for thirty years. Check out Publisher Ed Weintrob's column (and photograph) and Tom Callan's photo gallery for some local flavor (tastes like Bloomberg). Guys, is there an afterparty?
Posted by Aaron Short at 5:04 PM

Thanks for noticing my dedication to my work. :)