I am liveblogging the 34th today over at BushwickBK. Here's a sample from the most competitive election site in Williamsburg: 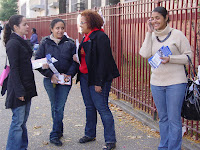 front of MS 250 in Williamsburg, the polling place close to Lindsay Park Houses, one of the highest turnout locations in the District.

Sure enough, there’s Diana right near the entrance, with three volunteers. She’s a little outnumbered. On the corner of Montrose and Manhattan Avenues, there are six Maritza volunteers to every one Diana helper. On the other corner is Steve Levin, the Democratic nominee and likely new councilmember in the 33rd District. Steve is wearing a Maritza Davila t-shirt and probably won’t visit Greenpoint again until he goes home later tonight.

“Turnout is about average,” said Levin, who greeted senior residents on their way to the polls in 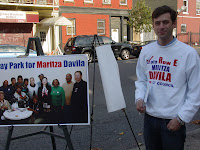 English and Spanish, reminding them to vote on “Line E.” “The numbers in general will be higher than the primary. The question is how much dropoff will occur (after people vote for the mayoral race).”

Half a block away Diana watched skeptically and assembled her troops.

“You have to be assertive when you walk with me. People do not understand what’s going with the switching of parties,” said Reyna to three female volunteers. “When you have a Democratic leaders asking Democratic voters to switch lines it confuses the voter and it only confuses the voter to stay home.”

A likely voter greets Diana and interrupts the conversation.

Diana Reyna's get out the vote effort was nothing short of amazing when I voted around noon. She had at least half a dozen folks out — that's more than I've ever seen before for any candidate (which includes the Obama campaign which I worked on in '08 on primary day).

For me the race was over when reformer Jerry Esposito did so badly during the primaries. Maritza Davila always came off to me as a hack backed by Lopez. So I voted for her not because I liked her, but more as a protest vote against Reyna who voted to end term limits.

Reyna's strength is that she's identified as THE Domican candidate which is the dominate ethnic group in the district (the hipster kids don't vote). Davila was seen as the Puerto Rican candidate, but that block of voters is exiting to the burbs.

Honestly aside from the ethnic angle there's no real difference between Reyna and Davila — they're both hacks who got started via Lopez. Not that they're bad hacks, but they're not reformers. It was ironic for me to see Reyna with her photo of her and Obama: I can tell that she didn't do anything during the NY primaries when it counted.

Mr. Nerd,
I find your identification of Gerry Esposito as a "reformer" laughable. Gerry has never given an opinion in public in his 30 years as the CB #1 District manager. His support of Vito Lopez and the Broadway Triangle land grab speaks volumes about his credentials as a "reformer." Voting for Davila while holding some kind of Obama-style reform in your heart is ludicrous. Davila succeeded as far as she did solely due to Vito's power and persistence, and in my dictionary, Vito is the polar opposite of reform!

Reyna had to reach right past Vito (Dem Part Chair for Brooklyn, lest we all forget) to support Obama in the primary. The NY delegations were solidly for Hilary. I consider this another example of Reyna's independence, a clear criteria for the label "reformer."

I'm not sure where your sense of authority comes from, but I think your perspective is definitely twisted.