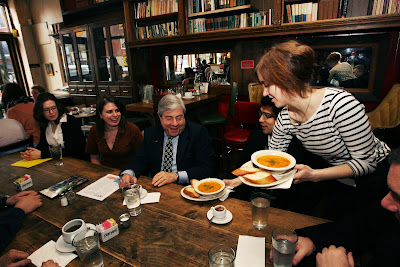 Once in a great while, a blog comes along that taps into the cultural zeitgeist while also elevating the public's understanding of a complex world around them. This is not that blog. Instead, it is a tumblr site of photographs of Borough President Markowitz eating or surrounded by food, entitled Marty Markowitz Eating.

Already the critics are raving:
*F*cked in Park Slope called it the BEST F*ING TUMBLR EVER
*Village Voice food and culture writer Rebecca Marx linked it up
*Grub Street dug up a priceless food-related Marty quote.
*L Magazine prostrated itself for an interview with the mystery blogger, who explained that Markowitz's food adventures come from his desire to promote Brooklyn's burgeoning food industry, by "killing two birds with one fork." I would add, that Marty would then grill the birds over a spit and shish kebab them.
*And finally -- holy sh#t-- Erin Durkin at The Daily News interviewed the blog author. This is out of control.

I called a political consultant to comment on the public's fascination with Marty Markowitz's fascination with food. Typically, politicos politely shun meals served at events, or eat quickly in a corner, for fear of being photographed swallowing something. But Marty puts food front in center. And then there's this:

"This is the best diet. Watching Marty Markowitz shove food in his mouth is like watching ducks being force fed before their intestines explode. That's how they make foie gras."

Photographs of Marty eating is a Tumblr gift that keeps giving. Like one of those Russian dolls, except if it were made of creme-filled chocolate. 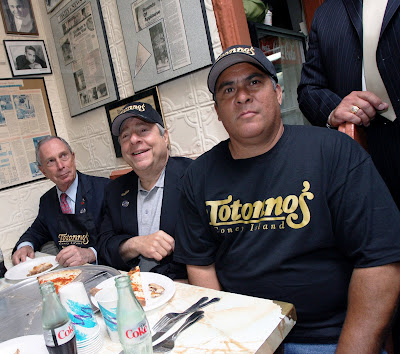 The next tumblr blog should be Mayor Bloomberg Not Eating.
Posted by Aaron Short at 3:18 PM