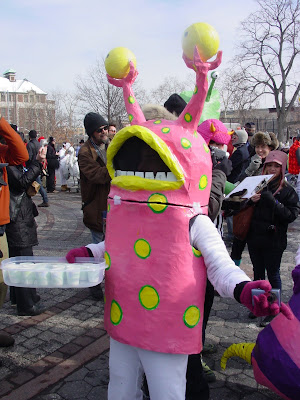 Congratulations to Disasterpiece for winning the 2011 Idiotarod!

I'll have more Idiotarod photos later, but let's get to the weekend tidbits:

*Rose Music Live and the cozy restaurant Vutera are closing at the end of the month.

*State Sen. Eric Adams is appropriating the NYPD's "If you see something, say something" phrase and bringing it on home-- by teaching parents to spy on their kids in a new video. And I've got it:


*It's women playing football! Meredith Deliso has a preview.

*The Times reports that the state has shut down the Williamsburg tortilla factory on Grand Street after a worker died from being crushed by a mixing machine last week.

*The new WG News is out, and there's a lot of arts coverage. I'll link to more this week, but check out the profile of artist Andrew Ohanesian who's creepy sculptures of interior rooms such as a jetway, a walk-in bodega refrigerator, and a dilapidated one-story house are among the most exciting exhibitions in Brooklyn.
Art writer James Calm explores that last one at English Kills: