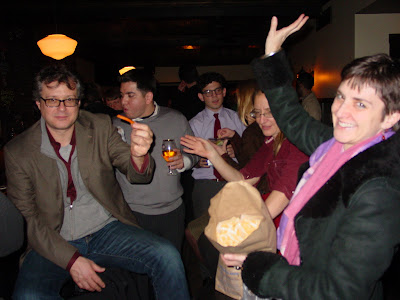 Community Board 1 gets its snack on via White Castle after last night's meeting.

A couple of thoughts about last night's meeting before moving onto other topics.

*It was one of those kitchen sink meetings that had a lot of little things to chew on (new bar openings, a mild debate over two venues Club Rust and The Wick, moderately substantial 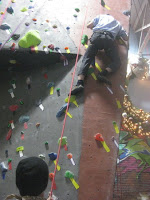 committee reports) but no big-picture controversy or presentation to frame the whole thing, so it felt pretty lethargic. I kept waiting for Mieszko to break free for a 40 yard run or for Esteban to lash out at something, but it didn't really happen.

*Councilmembers Diana Reyna and Steve Levin did not show up. I don't know what Diana's excuse was but Steve was busy climbing a rock wall at a fundraiser in the Gowanus. Fortunately, Patch.com's Carrol Gardens' edition has a photograph (right).

*If I had to pick five new things that you'll probably hear more about in the coming weeks that came out of that meeting they'd be anaerobic gas, The Wick, the Polish Slavic Center's cafeteria, the Noble Street fence, and the Kosciouszko Foundation's concentration camp messaging campaign which is a nice NYTimes/ NPR feature story that I haven't read yet.

*Neighbors Allied for Good Growth's Lacey Tauber isn't talking to the press anymore because "spambots" stole her identity and are commenting on the blogs. That's a new one.


*Jason Otano, the seductive-cherubic (seducherubic?) 31-year-old general counsel for Borough President Markowitz pushed a few upcoming Marty-centric events and reminded people to re-up to the board in a couple of months. Jason would be a nice addition to CB1 but he can't join the board because he's the guy who helps pick who gets on all the boards.

*The city declared a state of emergency at 4:47 pm yesterday and snow plows hit the streets maybe an hour after the snow started to fall. Looks like the sanitation officers decided to spend a little less time in the jacuzzi with Linda Ronstadt.

*What exactly is in "crack pie?"

*Finally, I can't stop watching this video of Secretary of State Clinton tripping on the portable stairway and tumbling into her plane. She can take a fall with the best of them.

I am not making this up! Here is an example: http://momwearsmanyhats.com/blog/?p=1235. Everyone knows my grammar is better than that. Anyway it's probably not really your fault, it's probably Facebook.