Community Board 1: We're snowed in!


It's back to business at Community Board 1 for the first meeting of the year. We're at 3/4 capacity and it's not going to be filling up because we have no agenda tonight other then a slew of liquor licenses and some hour-long committee reports.

The lovely Julia Morrow and Rami "Corrugated" Metal have joined Press Row, as has Greenpoint Gazette's Juliet Linderman who comments Morrow's ensemble as "bangin'." So noted. 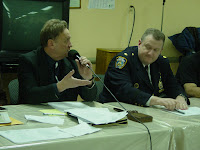 6:35 pm: District Manager Gerry Esposito takes the roll and Chairman Chris introduces new 94th precinct Deputy Inspector Terrance Hurson.
"I want to wish you a great 2011 and hopefully it doesn't snow too much tonight."
Linderman: Anyone know where Mayor Bloomberg is?


6:38 pm: Chairman Chris handles the sidewalk cafe applications, which include King Luke which wants 10 tables and 22 chairs, Juliet at N. Fifth Street and Bedford which wants 5 tables, and Since 1942 at Metropolitan Avenue and Roebling which wants 4 tables.

Public safety chairman Mieszko Kalita visits press row and hands some paperwork to Rami about the Kosciouszko Foundation and a petition regarding German concentration camps. I don't think the foundation wants a liquor license.

Now we're getting to Club Rust, on 134 Metropolitan Avenue and Kent Avenue. The venue brushed up some controversy with its cabaret license application since it is attempting to move next to a proposed movie theater.
The venue will have two floors with a potential capacity of 343 people, only using 278 excluding the roof. 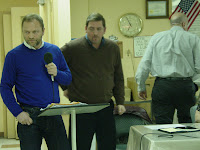 CB1's Ryan Kuonen who lives nearby has a question about how the queue of incoming customers will be lined up and how the theater owner will be accommodated.
The Club Rust owner is meeting with the theater's owner, and there's a stipulation against loitering outside and returning inside after being admitted.
More questions from Zoning Queen Heather Roslund about soundproofing operations and the owner (who also owns Veracruz Restaurant on Bedford) is called up to answer questions.
The owner explains that the roofs will have corrugated steel with 8-inch concrete reinforcements and double walls at the lower walls with a 12-inch cement block.
Chairman Chris asks about days of operation and they're apparently going to be closed Monday, Tuesday and Wednesday.

Jeff Mann joins Press Row and opines, "So let me guess this straight, there's no liquor, no smoking outside, and it's only open half the week?"
Then he turns to Officer Adamo and says, "You guys did a crappy job shoveling my walk last week."

7:04 PM: Chairman Chris defers the matter to the public safety committee and introduces Rami for an announcement.
"We had a town hall last month regarding the homeless shelter at McGuinness Boulevard. Out of that came the idea to write letters to Commissioner Diamond, so I put a series of letters here. We're going to invite him and HELP USA to another town hall.
It's going to be snowing tomorrow night and there are still homeless people in Greenpoint. We have a flyer that says you should call 311 if you see someone on the street who needs help.
We are working to open up Noble Street. I know Gerry has been very active in trying to open up Noble Street. It's right by the East River. We had a meeting with Janette Sadik-Khan and for the first time we felt they were willing to open it up, but she did suggest that if letters from the community were to come to her attention it would be very helpful.

Next is Ben Baruch from Councilwoman Diana Reyna's office who updates that 500 families received toys during a sponsored toy drive and two tons of food and 600 bags of miscellaneous items were given out at Los Sures.
Also there was a scoping meeting last week regarding how $2.5 million should be spent on improving Cooper Park. Within six months, there will be a plan from the Parks Department of what will ultimately happen.
Finally on Jan 19 at 5 pm at Borough Hall, there will be a continuation of yesterday's hearing on the blizzard. I believe we have some video of yesterday's hearing.

*Some good news this morning, Mayor Bloomberg had a convocation with other mayors on gun control and I'm going to pick up that report tomorrow.
I also attended the state of the state address and the inauguration of the comptroller.
There are problems with the TLC. They're going to have a hearing on the 11th.
I have much more stuff but because of the two minute rule, which makes no sense...
Deputy Inspector Hurson adds that there will be new officers coming to the 94th and 90th precincts- a point Garber raised.

*Chris Karvofsky (sp?) expresses concerns that people in the neighborhood and the press are calling the McGuinness shelter a "homeless shelter" but actually it's an "assessment center" and it's open 24 hours.
"I am alarmed with how little the community knows about this-- aaaaaand your time is up.

*Erika Volker- We also have a shelter on Skillman Avenue and it works completely differently. If there's a vacancy the homeless can stay there overnight.... aaaaaand your time is up.

*Another man to speak on the McGuinness Shelter. He finishes quickly.

*Julia Morrow from Parks thanks several groups in association for the work they've done bringing people to the Cooper Park meeting.

*Maria Bowman from El Puente notes that the group's Three Kings celebration will be at the Grand Street Campus on Sunday at 1 pm.

*Board member Will Florentino from Citizens Committee says that his group is giving grants for projects that increase civic engagement. Light applause.

7:29 pm: We have a presentation from Cassandra Smith about the GMDC building's plan to add 10 industrial units in its complex at Manhattan Avenue. The project is as of right, which means they can do whatever the hell they want there. Cassandra is just letting us know.
Linderman is keeping busy reading a New Yorker article, "Oh my god! What a crap article!" But she's enjoying a comic by Zachary Kanin.

Chairman Chris introduces Jason Otano from Borough President's office, who notes that the Beep's annual MLK Jr. event at BAM at 10 am, and Feb 3rd at 6 pm, there's a state of the borough address in Sunset Park (yes, there's a reception) and the annual Borough President Sweetheart's reception at El Carib in Mill Basin.
"To attend, couples must be married for more than 50 years."

7:36 PM: Motion to close the session and we're moving onto the board meeting with second roll call with 36 present.

"Chairman's Report. That's me!"
"On the first item, it was brought to our attention that Mr. Steve Lenard of city planning was very appreciative of the many forthright recommendations made regarding the definitions... of Vision2020, and very thankful of Heather's support, and Heather, what does this say here?"
Heather Roslund adds...
"It was extensive and comprehensive... and they incorporated almost every recommendation we made."

And with regards to the "snow debacle..."

Vandervoort Avenue was blocked off for several days. Commercial traffic had to go around it. It was a mess. We don't want that to happen again to our community."
Chairman Chris proposes a resolution regarding a Department of Sanitation Salt Pile asking the agency to stop its snow melting operation on Vandervoort. This is a long letter with many whereases. Erin Durkin at the Daily News has some of this covered here.

7:47 PM: Committee reports. Heather Roslund notes a short agenda that included a 10-year extension of its variance for a continuing gas station near Graham Avenue.
"It's a family owned business that's been in operation for over 50 years.
Heather continues.
"And I wanted to add how thrilled I am about being included in the Vision2010 waterfront plan. It's great to be recognized."

7:53 PM: Ryan Kuonen for Environment.
"I attended a meeting entitled the beneficial use of anaerobic digester gas."
Kuonen explains that the National Grid/ city project she was briefed about is a "techy" "amazing" project but the proposed location is a problem as in a a pocket park promised to the community.
"It's a great project except for its stupid location. They're going to come back with something. We don't know what happens to our pocket park."

"Good evening. Public Safety. First, Deputy Inspector Terrance Hurson attended a Public Safety meeting, and introduced himself.
Now liquor licenses. Committee Reviewed the following applications...
Brooklyn Wick LLC aka The Wick application is for a restaurant and a music venue. And a backyard space. This space is very large. It's an old beer brewing facility. They will be coming back to discuss a cabaret license. Committee recommends approval.

Heather Roslund has a question about The Wick and why there are so few chairs (24 tables and 15 bar stools) in its application.
"Did you ever have a drink standing?" asks Mieszko. "Problem solved."
Heather brings up more questions and Chairman Chris asks to separate The Wick from the rest of the items. The other items pass and so does The Wick.

Mieszko brings up another item that Polish community members don't like how concentration camps such as Auschwitz are referred to as "Polish" instead of "German" or "Nazi-occupied Poland" since Germany invaded Poland 70 years ago.
Esteban Duran asks why this issue is before the board today and Mieszko explains this came out of the Polish community in Chicago and Greenpoint.
The motion carries.

8:36 PM: Karen Nieves isn't here so Will Florentino takes over for his first ever committee report, noting a flurry of activity.
"There's 14 feet of snow outside right now... Okay I see I'm clearing the room."
Will also knows that people rebelled against the MTA, including Tom Burrows, who took his pants off on Sunday.

8:43 PM: Jesus, even Lincoln Restler gets the microphone. At this point everyone who is still in the room has said something.
"I remain very upset about the handling of this past blizzard. Next Wednesday there will be a hearing at borough hall about the snow. Fortunately the city has already declared a state of emergency today."
Lincoln thanks Our Lady of The Snow for inviting him to their induction ceremony and said he had a great time hanging out with the camels at the Graham Avenue Three Kings Day parade.

8:46 PM: Thankfully we're done. Let's look at a No Pants Video from yesterday.