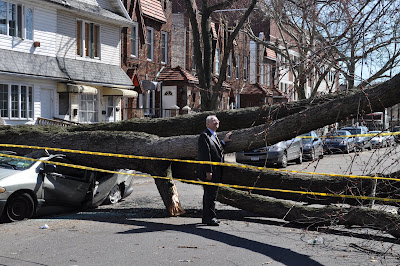 Council candidate Joe Lazar poses next to his campaign.

It's been several days since I did some links and a lot has happened this week from storm surges, to political campaigns to Ray Kelly bowling in Williamsburg for some reason. Let's look at six well-written stories that deserve a second look, as well as a few gold stars for some electric posting.

*It's a big week for bike lanes, with the first Brooklyn Greenway Initiative workshop dropping tonight in downtown Brooklyn with Community Board 2. To get you in the right mood, read Andy Campbell's survey of Flushing Avenue's 2-way protected lane (Ben Fried also takes a look in Streetsblog) and Gary Buiso's surprising look at churchgoers parking on bike lanes in Brooklyn Heights.

*More Greenfield-Lazar coverage, which is riveting the political chattering classes. The Times' Kareem Fahim has the play by play and The Courier's Steve Witt gets a gold star for his gut instincts. According to Steve, he showed up at Lazar's afterparty first, which was held in a catering hall in Boro Park only it was vacant and there was no food. Steve immediately assumed without looking at the poll numbers that Greenfield pulled the upset and headed over to his Ocean Avenue headquarters. Sure enough, he was right. Half the Brooklyn delegation showed up including Steve Levin, and there was a decent spread too. And that's A Short Story's news gut call of the week.

*Juliet Linderman has been freaking everywhere, as usual, hitting up an owner's forum that St. Nicks sponsored, a DEC oil spill update, a nude draw-a-thon, and Blue Bottle Coffee for what must have been a refill. You get a gold star!

*Another gold star must go to the Brooklyn Paper's Stephen Brown whose horrific photographs of chicken heads and animal entrails found on the banks of a Prospect Park pond deserve some kind of recognition. Click that link for the photo montage.

*A platinum star makes its way to Miss Heather at New York Shitty has been all over the hostel situation in Williamsburg. It is going to get messier.

*My last gold star goes out to Brian Ries at Free Williamsburg who has been blogging his brains out this week on Williamsburg Walks, the DIY Music Festival, and my favorite, the campaign to get broadband internet to North Brooklyn. Not only did he get the story right, he got the f#cking graphic right. Jim Carrey circa Cable Guy. Brilliant, dude. Let's drop the Carrey skying over Jack Black video in here just for Brian. Be sure to clean up the glass.