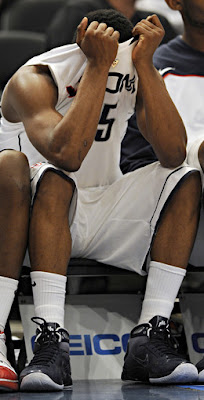 March Madness is less than twenty-four hour away, but I am relatively sane. (No, thank YOU Connecticut Huskies. We had a great run these past few weeks.)
The tournament rolls on, and as an avid college basketball fan who will not be filling out his bracket pool this month, I thought I would give YOU, the loyal readers of A Short Story, a few pointers.
1. Do not pick Cornell. The Penn Quakers demolished them in Philadelphia and their record was 6-22. Now they get Fran Dunphy's ridiculously underrated Temple team which finished 29-5 but earned a 5 seed. It is an injustice! It is so much of an injustice, Rev. Al Sharpton is preparing to hold a press conference in North Philly tomorrow morning. Cornell won't last past the first round, let alone the first half.
2. The Big East is underrated and two teams will make it to the final four. Good luck picking which two. Georgetown looked great in the Big East Tournament, so did West Virginia, but I think Syracuse will make a decent run in the tournament while WVU could falter. I am not as impressed with Villanova or Pitt this year and Louisville is in a tough bracket. What do you think, Andy Marte?
3. Duke needs to lose. For the good of humanity. Greenpoint is going to explode if Duke wins. You do not want to be reading stories next week about how Mike Kryzkesfkezfsskszzfzkfzzyzzzyzzy and Duke are back. I'll say Elite Eight.
4. Kansas and Kentucky look pretty damn solid don't they? Damn it.

5. There will be upsets this weekend. Let's go with Houston winning against Maryland, Florida over BYU, Butler making it to the Sweet 16, and Fran Dunphy's mustache becoming a national sensation.