The Short List: Nut Up or Shut Up Edition 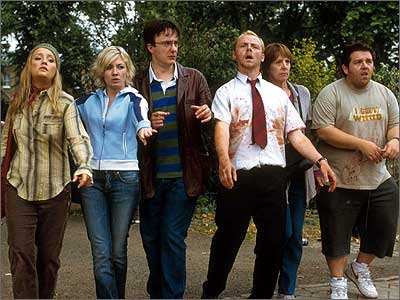 After next week's zoning battles, we're all heading to the Winchester

Next week is Nut up or Shut up week (sorry, I can't put Woody Harrelson on this blog, so Shaun of the Dead it is). I can already see it coagulating. We are likely going to hear new revelations regarding Governor David Paterson (the Albany Deathwatch is in full effect), whether health care will really get passed by Easter despite what House Democrats say, and who is going to the Big Dance when Madison Square Garden welcomes the Big East Tournament to midtown (hint: not Connecticut).
On Brooklyn's shores, it promises to be a big week for development projects, particularly from developers names Isaac/ Isack. Let's take a look at the calendar:

Nut up or Shut up Monday: City Planning finally rules on Williamsburg's Rose Plaza following disapproval from the community board and the Borough President. This drops into Steve Levin's lap immediately afterward.

Nut up or Shut up Tuesday: Community Board One (Williamsburg/ Greenpoint) votes on CPC Resources' New Domino plan in a long public board meeting.

Nut up or Shut up Wednesday: Did someone say bankruptcy hearing? Capital One Bank wants more money from a local development so I'll see you in court.

Nut up or Shut up Thursday: Back to court we go for the Broadway Triangle lawsuit filing, in addition to the Borough President's public hearing on New Domino. And, is this the untimely end of Robert Scarano? Remind me to call him.

Nut up or Shut up Friday: I think someone's birthday might be happening then. Better check The Facebook.

Whew! As for the weekend, I have two words for you. Puerto Rico. (Did I say Puerto Rico, I meant SITE Fest. Anna D'Agrossa has you covered with the highlights for all the Bushwick happenings.). And afterwards, we'll see you at the Winchester. Don't stop me now...