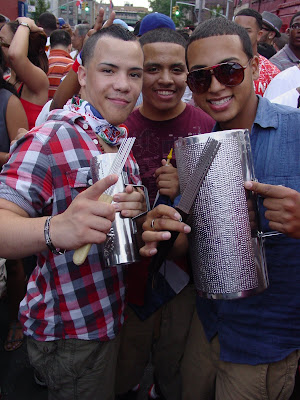 Bang your own can at Dominican Day.

Shootings and burglaries aside (poor Rock Star Bar lost 11 bottles of Campari- the most valuable thing in the place), there's a lot going on as summer stretches out these next few weeks. Let's take a look.

*Biggest story of the week is Andy Campbell's bike lock vigilante story. It even got on CBS2. Anyone know how to remove crazy glue from a bike lock?

*Congressional candidate Kevin Parker's troubles just keep adding up. First he was in some serious debt. Then he hit a photographer. And now he's going to court. Can we get a head start fast forwarding to The Situation's congressional run against Vincent Gentile in Bay Ridge?

*Erin "Dunkin'" Durkin of the Daily News drops some big food news from Coney Island. Is Shake Shack coming to the boardwalk? Sounds like a good possibility.

*Erin Durkin also picked up a rendering of a possible Apple store in downtown Brooklyn. Marty Markowitz is understandably excited.

*Jelly blabs to NPR about the cost of free concerts in a long interview. Is this an early premonition of their plans next year? Here's Sarah Hooper's quote:

*The Times looks closer at Newtown Creek's Superfund chances, but it seems like this article is treading water.

*The Nets are getting a new name. Hopefully it's not in Russian.

*Juliet Linderman took a Krav Maga self defense class from an ex-Mossad officer and now she knows how to kill you.

*Finally, Vans is opening an indoor skateboard facility on Franklin Street. In its honor, I invented my own move: The Short Wheelie, which is when you fall on the asphalt ass backwards as the skateboard goes flying forward.
Posted by Aaron Short at 12:09 PM