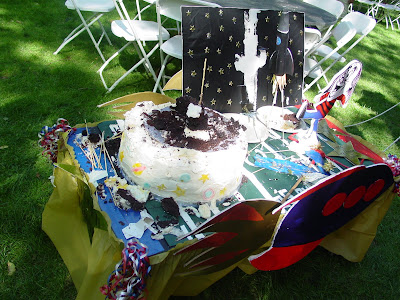 This reunion cake was a bust, but this week's links are not.

This weeks links are inspired by two stories by two of my favorite reporters Sarah Ryley (The Real Deal) and Sal Gentile (City Hall News) who look at two sides of the same story: the Williamsburg condo explosion.

Gentile details how the city's innovative plan to turn empty and stalled condo buildings into occupied affordable units through its Housing Asset Renewal Program has itself sputtered. Why? Because investors still have too much confidence in the market. An excerpt from Gentile's article:

“Somebody has to be willing to, essentially, take less,” said Jerilyn Perine, a former city housing commissioner in the Bloomberg administration and executive director of the Citizens Housing and Planning Council.

Perine cautioned that officials should not be criticized for attempting a novel solution to the city’s housing crisis, and said that the program’s failure might be seen as an indication that the market is once again experiencing an upswing.

“Because they have some confidence in New York, and in New York’s ability to have the housing market come back, nobody is eager to say, ‘Yes, I’m going to take 50 cents on my dollar investment,’” Perine said.

And why not. According to Ryley's report in The Real Deal, prices in Williamsburg are on the rise and units in luxury developments are selling well. An excerpt:
So, The Real Deal made some calls around the neighborhood. While nobody quite scored 40 buyers in one month, it does seem like sales and leasing activity has been strong at projects with some combination of the following three winning characteristics: "location, price and the finishes," as broker Christine Blackburn of Prudential Douglas Elliman put it. Indeed, the projects that have been popular are all in tight proximity to Williamsburg's stylishly retailed Bedford Avenue or right on the waterfront. And none have tried to pass off "hollow doors and cheap wood flooring" or "traditional" color palettes as luxury, like other struggling developers in the neighborhood, said Blackburn, whose team has sold or leased dozens of apartments in Northside Piers, 184 Kent and 70 Berry among others.

Warehouse 11 sold around 90 of its 120 apartments since January; the waterfront loft conversion 184 Kent leased 138 apartments in four months, including 38 in the last three weeks; and 70 Berry Street sold all of its 38 apartments in less than five months, according to various real estate sources.
Now even the Edge -- the 565-unit waterfront project by Douglaston Development that has withered, sales-wise, in the shadow of its significantly less expensive neighbor, Northside Piers -- seems to be catching a break. 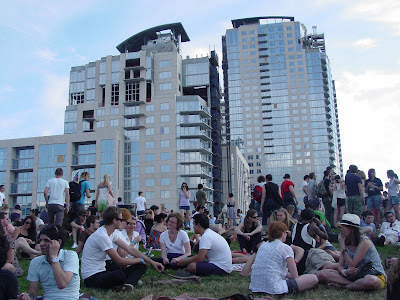 On that note, let's take a look at five stories from the past few days that are booming.

*McCarren Park's tennis courts were so decayed that a group of tennis players raised the money and fixed up one court all by themselves.

*L Magazine profiles all the DIY galleries in Bushwick.

*Taste of Williamsburg was a massive success. More on this later.

*Finally, the biggest boom of the week? Take a look.

That's right. The National is everywhere but on May 15, they were at BAM. Listen to why.