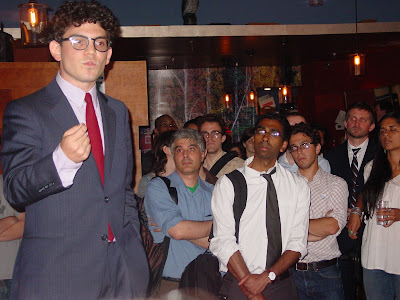 My name is Lincoln Restler and I am running for an office my parents didn't even know existed.

For those of you who didn't secure Yeasayer tickets at Webster Hall last night, you had the option of attending one of several District Leader fundraisers instead as well as Manhattan Beep Scott Stringer's 5oth birthday fundraiser (Happy Big Hawaiian 5-0 Scott!)

Now, District Leader, or State Committeeman, might be a few steps above municipal dog catcher, but it is still important enough to inspire county-wide interest in this little-known seat. Lincoln Restler launched his campaign at Oulu in Williamsburg last night, vowing to change the way elected officials and judicial nominees are chosen and endorsed for office in Brooklyn. He's running against former Council candidate Steve Cohn and here's more from the release:

As a founding member of the New Kinds Democrats, Lincoln is running to clean up the Brooklyn party which has 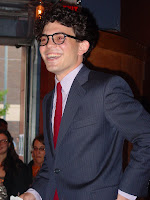 seen three of the past four party bosses indicted on corruption charges. Lincoln will stand up to the machine and fight for transparency and accountability in our local Democratic Party. "The era of the political clubhouse is long gone, but the Brooklyn machine is alive and well. Brooklyn needs an infusion of bold leadership, progressive ideals, and a commitment to grassroots organizing. I'm running because we deserve a better brand of politics," said Lincoln. Born and raised in Brooklyn, Lincoln is a strong advocate for our community, active across the 50th AD as an elected officer of Community Board 2, a board member of the Pratt Area Community Council, the Fort Greene Association, and Brooklyn for Peace. Lincoln is also a founding member of Brooklyn Vanguard - a group focused on increasing engagement and support of the Brooklyn Public Library. As a Program Officer in the NYC Office of Financial Empowerment, Lincoln develops basic banking products for low and moderate income New Yorkers. Lincoln will bring his expertise and commitment to his native borough to fight for more open space, affordable housing, and the real needs of our community.

Not to be outdone, Hope Reichbach launched her own campaign for District Leader in Boerum 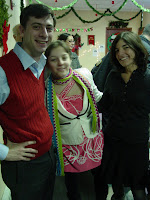 Hill last night, where she will face former Council candidate Jo Anne Simon, who is already complaining about the race. Here's an excerpt from Hope's release:
“I am excited to announce that I am running for Female District Leader in the 52nd Assembly District. As a lifetime Boerum Hill Resident and daughter of local activists and organizers, I know I can be a powerful voice for the entire community. Growing up, I was inspired by generations that came before me; their dedication and commitment to change through grassroots political participation is truly inspiring. Over the past few years, I have seen my generation’s potential to be a strong voice and I will help our community unite behind progressive ideals. As a young activist with deep ties to the progressive movement, I can reenergize and unite the Democratic Party in our community and return our focus to our core values,” Reichbach said.

Now we're all learning a lot about these races and this position in particular this week. Did you know that a District Leader hires poll workers on election day? And that a DL has a say in who can be a civil court judge in Brooklyn? And that the DL ultimately chooses the party's county chair, which is the main reason why Kings County Chairman Vito Lopez wants to have as many Lopez-friendly officials as possible?

You did? Fair enough. Let's get onto some new things we learned last night.

1. Lincoln Restler's parents had no idea what a District Leader was until he began running for it.
That was the running joke from last night, but here's something else to consider. Restler, who grew up in Brooklyn Heights, attending Packer, enjoys some entrenched support of his own, right in Steve Cohn's backyard. It could even split their synagogue where both families are members. It was evident at the fundraiser, which drew about 100 people, and earned a positive nod from De Blasio staffer Matt "Chicken" Wing for the turnout.

2. Hope Reichbach's roots in Boerum Hill can't be dismissed either.
While Reichbach did not attend Gallatin (settle down Juliet) or room with Lady Gaga as an earlier post suggested, she has been active in politics practically her entire life. Some of that is due to volunteering with her father, Judge Gustin Reichbach, but she also worked all last summer on Steve Levin's council campaign and sued Donald Rumsfeld while she was still in high school.

3. Nick Rizzo, former Evan Thies staffer, is contributing political news with Gawker
Nice to see Nick landing on his feet with a decent gig and hopefully he gets to contribute national news on the site more often after Alex Pareene left. Here's a sample of his latest work.

4. The Observer's Reid Pillifant gets paid to party with David Axelrod
How the f#ck did I miss this? Reid and the Observer's media guy John Koblin hitched a ride to Washington and name dropped as many people as they could in an epic running party diary during White House Correspondent's Dinner weekend. F#ck District Leader Tuesday. Nice job guys. Who knew Bruce Ratner got to Tracy Morgan? Hey, Reid, did you get Tony Romo's autograph or did you settle for Chace Crawford's?

Reid's dream came true this weekend. He got to meet Nate.

5. NAG Action also happens. Action jeans? More like mom jeans!
So the main result from last night's brainstorming meeting is that there will be a Domino-related speak out on May 23. Also, Lacey Tauber's dad looks like a Jewish Chuck Norris. 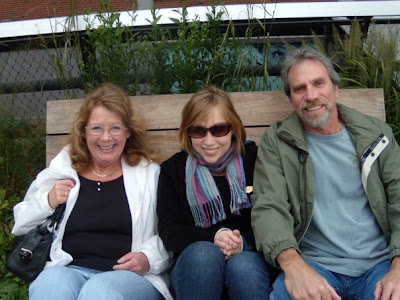 Great post Aaron! I had no idea what a District Leader was before today. Lincoln sounds like an awesome candidate. It's been great to see NYC politics take a more ideological turn this year.

Just curious, but why did Lincoln choose to run in this area?

Lincoln's running in the 50th because he lives in the 50th, and--like the rest of us--would like better representation on the Democratic State Committee.

Are Steve and Hope dating? If not, then who is Steve dating?

he is a spoiled, rich, and arrogant kid, trying to run in this neighborhood thinking the yups will carry him...

He also has a huge surprise coming his way!! =D