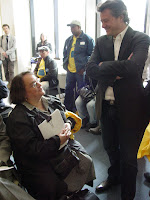 recommendation, which is being closely scrutinized by the City Planning Commission this week and next before being sent to City Council.
Ward, a Community Board 1 member, is arguing that Marty's recommendation was more of a yes, but- with the conditions or modifications being that the site's developers eliminate a substantial amount of parking spaces, trimming the project's bulk and density on the upland parcel, and make the commitment for affordable housing binding.
Why is Marty's recommendation an "enthusiastic approval?" Because he said it was. Let's go to Marty's statement...

“It has certainly been a goal of mine as borough president to ensure that Brooklyn’s gorgeous yet under-utilized waterfront be reclaimed for a vibrant mix of contemporary uses—from recreational to industrial, commercial and residential. Though I am attaching some conditions to my support of this project, I want to commend Refinery LLC for its ambition and for submitting a plan I feel both appropriately celebrates our waterfront and understands the need for affordable housing in Brooklyn .

In my land use role, I always seek significant community benefits from developers asking permission to begin lucrative projects—like more affordable housing, access to public space, the inclusion of amenities like supermarkets, the creation of jobs, use of local labor and construction supply companies and the improvement of residents’ quality of life—and this project is no different.

The modifications I am seeking from the developer as conditions to my overall support are:

Of course, as this development proceeds, the City and relevant State agencies have a responsibility as well to ensure its success, by guaranteeing requisite traffic management and the adequacy of schools and public transportation. Regarding the latter two, I have alerted MTA Chairman Jay Walder and Schools Chancellor Joel Klein to my concerns and wishes regarding needed changes and resources.

Also, given the ambitious scope of the affordable housing commitment, the costly adaptive reuse of the Refinery Building and the more than double amount of publicly-accessible open space with a quarter mile of waterfront esplanade, a scaled-down project can only achieve this ambitious development with the addition of public funding. I believe this development deserves a direct infusion of City funds, and would encourage the developer to seek Brooklyn Housing Development funds as well as funds from City, State and local public officials.

Regarding parking needs, I defer to the community board in that it is premature to know if the project would need as much parking as proposed, therefore I would prefer that the applicant withdraw the request for more parking as part of the final phase.

These are my recommendations, and I am confident that those of City Planning and City Council will make the project even better. Should my conditions be adopted, and the commitments to public-private partnership that I believe are possible here be achieved for the community, I will proudly say to Domino, ‘Domi-yes

I read the recommendation. It was a much more positive recommendation on waterfront development than Rose Plaza, which he disapproved its special permits. Marty also asked about the project's creation of local jobs during his public hearing at Borough Hall, which he highlighted as critical for the project's success.

Now, there's a lot of spinning going on with this $1.2 billion project on all sides. The community board has voted against large-scale development on the waterfront twice in the past year now, but in favor of large scale development further inland (Broadway Triangle). The vote on Domino comes in the context of board members seeing the effect of added development east of Bedford Avenue and its effect on local streets and subway lines.
These are big problems that the city has been slow to address while green-lighting development after the 2005 rezoning.

But back to Marty for a second. Let's look at how Marty's City Planning appointees vote on Domino. If they vote no, I'll buy the CB1 executive board a box of cookies from Fortunato Brothers. If they vote yes, Ward, how about you buy a box for Press Row?
Posted by Aaron Short at 1:37 PM