Perennial candidate Andre Soleil will once again launch a campaign against Joe Lentol, City Hall News announces. Few surprises here. Soleil, a long-shot, was kicked off the ballot last year for having invalid signatures on his petition. He also filed a lawsuit against Lentol and his press warrior Amy Cleary for violating his civil rights after they challenged his petitions. The whole thing was short, nasty and strange and Soleil was eventually bumped off the ballot. 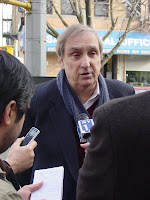 Now, Soleil was trying to win the endorsement of Vito Lopez, by trying to meet with the very same lawyer that represented Lentol in the petition challenge case. City Hall News suggests, but doesn't really prove, that Vito was trying to run Soleil, or even some other candidate, against Lentol because of an alleged beef that they had. So are Vito and Joe feudin' fussin' and a fightin'?
Here's Joe "The Legislation" Lentol, from City Hall News:
“Vito and I may have our difficulties,” Lentol said. “But I know he supports me whole-heartedly.”

We better drop this one too because the last video was too weird.