Movin on up to the Williamsburg waterfront!
On the morning before City Planning's hearing on the Domino Sugar refinery, WG News and Arts published a long article noting that opinions in the South Side are not in lockstep behind the $1.2 billion rezoning proposal (2,200-2,400 units, 1700 parking spaces, 4 acres of open space, 147,000 sq ft. of commercial space, 5.0 FAR, and maybe 6,000 new residents movin' on up' to the west side.)
Before we get into this, one point to note. No bones about it, this is an article with an agenda to derail the project and it would be better served (and stronger) in an editorial. Once an article crosses into an editorial voice, it becomes tricky to pull out the important and relevant points from the argument's slant.
But let's do it anyway. 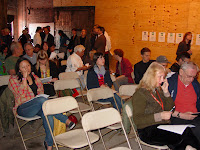 *Williamsburg residents Frank Ortiz and Dennis Farr have something to say about the New Domino project that's worth gut checking. A new, largely luxury development that is as big as it is could displace tenants in surrounding rent-stabilized buildings. That's a big point. Tenant harassment in the South Side is real, and it is strange that South Side groups which have fought hard against it for decades are not more vocal about secondary displacement.

*Catholic parishes in the area, led by Father Rick Beuther, have indeed been organizing to 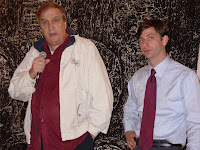 support New Domino, and both Churches United groups support the project even before the they fractured over the Broadway Triangle about two years ago. There certainly are agnostic and evangelical Latinos in the South Side but the vast majority of Latinos are Catholic. Organizing residents to support or oppose a development project based on whether it meets their best interests is something that many groups do throughout the city. The article did not note that the group could be in a position to pressure CPCR for a better deal (200 more units affordable housing and less density/ fewer total units, which is what Assemblyman Vito Lopez wants, for example). But the reporter does quote, Beuther noted that CPCR has donated to his Church. That's interesting.

*CPC Resources has a PR campaign. All major developers/ development projects have a PR campaign to advance its agenda to the public. This isn't news. 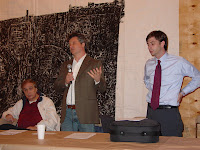 is mentioned briefly (as Steve Levin's argument), and too quickly. This is another big deal, and you'll hear more about it on Wednesday.

*You'll also hear more about what does it mean to be affordable housing, which is mentioned by Phil DePaolo in the article. It will be a talking point tomorrow but it's a point of negotiation for Steve Levin, and possibly his best chance of influencing the project.
Posted by Aaron Short at 5:38 PM