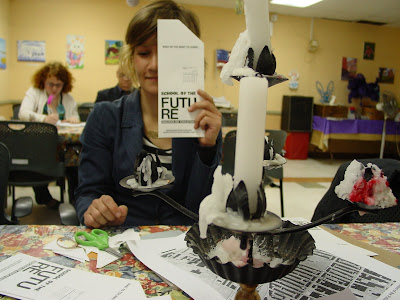 I will have to add to this shortly (aka tomorrow morning), but yes, after a vociferous argument at 9 PM last night, Community Board 1 will write a letter in support of the Greenpoint Renaissance (GREC) proposal to redevelop the Greenpoint Hospital. The back and forth will be posted later. Tonight is Steve Levin's Domino public meeting at The Boiler on N. 14th Street.

Updated! Let's pick up where we left off late Tuesday night at about 8:50 PM... on... as the Community Board Turns...

8:50 PM: Tom Burrows pushes Chairman Chris to send a letter endorsing the GREC proposal for the Greenpoint Hospital development, but Chris is hesitant because "it would look like favoritism." Tom doesn't like this.
Chairman Chris: We don't know who's out there, who has applied.
Jaye Fox chimes in, saying "it is appropriate and right" to send a letter and that there is precedence for the board's actions. Then she lays the smackdown on HPD's Holly Leicht.
"Holly has been dismissive and rude. We can't let her get away with this. She's being political behind the scenes. Yet again, this is HPD being rude to this community board.
Karen Nieves asks why there won't be a letter and Chairman Chris explains that he can't resolve this issue at this time. Now everyone wants to say something, and Chairman Chris gives the floor to CB1 member (and St. Nicks staffer) Jose Leon. Chairman Chris checks the clock, which is close to 9 PM, and finally caves in.
"I can't guarantee you that they are going to listen," says Chairman Chris.
8:58 PM: There's a motion, and a second, and a near-unanimous vote. Jose abstains. Mr. Postman... send that letter!

hey man. there was another motion after the GREC one from Del about the collab.....