Thursday links: Prelude to a Quaalude

I've gotten so caught up in anniversary celebrations that I missed posting a morning list of links. Let's go to the highlights!

*Every year it seems like there's some kind of weird drug bust in Greenpoint. First it was cocaine in a butcher shop's sausage casings. Then it was the hipster drug den. This time, it's the bi-coastal Quaalude laboratory. If I were running the underground Community Board 1 meth lab these days, I'd be pretty anxious.

*We thought Williamsburg would do poorly in the 2010 Census, but this poorly? Gothamist and Free Williamsburg take their neighbors to task for not filling out their Census forms (31.3% at the last count)

*Williamsburg Walks will be shortened from 3 weekends to 1 weekend. That's a 33 percent cut! Also getting cut? The Greenpoint Memorial Day Parade (down 25 percent!). And this is before the city's budget gets approved.

*Ralph's Water Ice is now going to be a deli. Don't worry, you still have Fortunato Brothers.

*Remember to tune into Let's Make A Deal! with this week's guest-- Isack 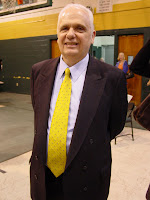 *The Market Hotel, which is neither a market, nor a hotel, is also... not open. But it's not closed for good.

*Finally, Assemblyman Joe Lentol wants broadband so badly he will risk death by wading into Newtown Creek. At some point. Probably. Joe if you actually do this, I will be right next to you... in a boat taking photographs.
Posted by Aaron Short at 2:17 PM

Make sure you let us know when/if Joe takes that plunge! I want to be there to cheer him on. Joe's awesome.