Raindrops keep falling on my head 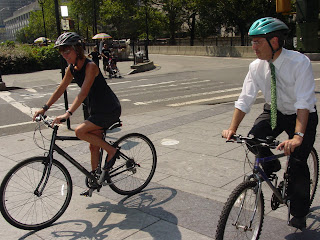 ... but that doesn't mean my eyes will soon be turning RED!

Okay, things are better on the bicycle building bill now. Queens Councilman John Liu will support it and whatever differences Liu and Councilmember David Yassky had (they are facing off in the Comptroller race) have been settled on this issue.
"We've already arm wrestled about it," Liu said.
Liu also said that he tried to bike from his home in Queens to his office on 250 Broadway but security wouldn't allow him to bring his bicycle up to the office!
Lots of Transportation Alternatives advocates at the press conference too. First Kent Avenue, then the MTA reform advocacy and congestion pricing, and now this. TA is gaining street cred to go along with city residents shift towards cycling as a commuter mode of transportation. More on this later.
Posted by Aaron Short at 4:13 PM