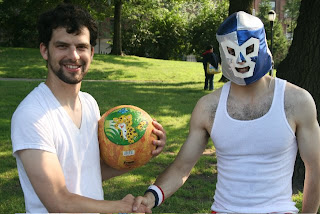 It seems everyone is amping up for tonight's NAG forum (not a debate... a forum) Rumble in North Brooklyn. Of course I just have a headache. The good news? I will not be moderating. The bad news? It will still last two hours. At least we're getting drinks afterwards. Right? Right?

Things to look for tonight in no particular order:
1. Will Jo Anne Simon press Evan Thies about the consequences of the 2005 Williamsburg-Greenpoint rezoning that took place on David Yassky's watch?

2. Will Ken Diamondstone go after Steve Levin regarding his endorsement by the Kings County Democratic Party and Jo Anne Simon for her role in bumping him off the ballot in 2001?

3. Will Evan emphasize policy solutions to open space and vacant lots in Williamsburg and go after Steve Levin for making general objections?

4. How many times will the words "reform", "open space", "rezoning" and "hipster" be used.

5. Will Steve Levin show up and if he does, will he mention his endorsements from the New York League of Conservation Voters, United Federation of Teachers, and DC37?

6. What in G-d's name will Isaac Abraham say about the New Jersey corruption bust that ensnared 14 rabbis, including one of his campaign's financial contributors?