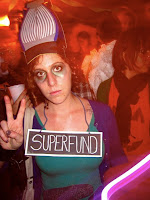 At Thursday night's comedy show at The Polonaise, What's So Funny about Greenpoint?, New York-based comedian Todd Barry provided an answer: Juliet Linderman.
A Short Story missed this one last night so we're going to have to rely on other sources, which corroborated that Barry veered off his planned set to make fun of Linderman, who was taking notes and photographs while seated in the front row whenever a comedian mentioned the word "Greenpoint."
For the next 30 minutes, Barry questioned whether the Greenpoint Gazette was "real" and proceeded to place a large order of the paper to his Manhattan apartment.
"He was definitely talking about her for a really long time, but I had a lot to drink so I don't really remember," said one source.
Councilman Steve Levin was there also, but declined to comment.
Posted by Aaron Short at 2:40 PM

An affront to Juliet is an affront to all Press Row members, past and present. I say we kick Todd Barry's bald, deadpan ass.

I agree. Those bald guys are outta here!

the blond planners mafia will not stand for it.