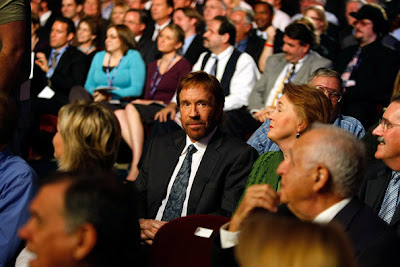 Norris defeated Democratic challenger Kathryn Guinan to become the first Republican in the office in 26 years. The Norwich Bulliten has a completely unironic roundup of the race here.
Meanwhile, a much cruddier paper, the New London Day, has a story about people (ahem) stealing Norris' campaign signs, with no mention of this blog.
I am reaching out to Mr. Norris for an interview about his victory and plans to distribute his unique brand of justice in the future. As Connecticut Law Blog puts it, "Someone ran against Chuck Norris. Chuck Norris won."
Or as Google puts it: "Google won't search for Chuck Norris because it knows you don't find Chuck Norris, he finds you."