City residents are up in arms about proposed transit hikes, which are likely to be approved by the MTA tomorrow, though two local concerns festering for years dominated the discussion at CB1's transportation committee meeting Tuesday night. 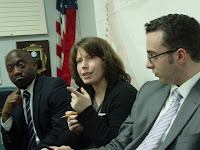 Led by the efficacious Community Board One member Teresa Toro, Transportation meetings are among the most well-attended committee meetings in the borough. And for good reason. Last night's meeting featured two presentations by the Department of Transportation concerning truck traffic on local streets and Transportation Alternatives about a redesign of the Pulaski Bridge. Both presentations were short but detailed.
Transalt wants Brooklyn CB1 to work with CB2 in Queens to support their plan allocating more space for pedestrians and cyclists, possibly by adding a cycling lane on one of the traffic lanes. A letter is in the works, as is a pedestrian walk campaign in May. The Queens Desk has more about it here.
The DOT is looking to crack down on large trucks and trailers driving through local streets and add more visable signage to indicate through streets and local streets. Residents pointed out some key streets in Greenpoint where trucks were abusing traffic laws, including a grocery store on Beadel Street and reiterated their concerns at the meeting. Greg Hanlon of The Courier will have a more in depth article about this on Friday.
The remarkable thing about the meeting was the responsiveness of the DOT to very specific transportation concerns local residents brought to the meeting. Though these transit concerns are prevalent throughout Brooklyn and Queens neighborhoods, DOT officials knew the issues being discussed and detailed how they would seek solutions. How they respond over the coming months, with the help of enforcement from the 94th and 90th Precincts will be interesting, but this is a good sign.
Posted by Aaron Short at 12:27 PM