Community Board Meetings in New York City are a bit like town hall meetings in small-town America, only if you split up the city into fifty-nine fiefdoms.
In Brooklyn's Community Board One, which contains most of Williamsburg and Greenpoint and the 94th and 90th police precincts, attendance at monthly meetings is usually very good. The last two meetings, held in the cramped common room of the Swinging Sixties Senior Center (211 Ainslie Street), have been standing room only and have featured hour-long presentations about waterfront public access and design updates for McCarren Park Pool. The smell can best be described as an intoxicating combination of lentil soup and bengay. Tonight a contextual rezoning presentation from the Department of City Planning is first on the docket. Riveting. 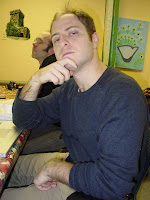 6:45 PM: Chairman Abate, 90, calls the meeting to order. Abate will be retiring this June after decades of service. We've got a full house. My former colleague Greg Hanlon has arrived. He's eating a chicken roll from Sal's Pizza, happily extolling a recent article printed in the Sunday Times. Hanlon is strangely clean-shaven. He looks at least ten days younger.

6:55 PM: It begins. The DCP's rezoning is for an inland area of Greenpoint and Williamsburg along Metropolitan Avenue and McGuinness Boulevard. The rezoning was mainly proposed to limit the height of future residential development, bringing several blocks into R6, R6A, or R7A. For community activist Phil DePaolo, this comes three years too late. DePaolo, attending the meeting tonight, has made several posts on his listserv about runaway development on Williamsburg's northside and along the waterfront. Now the area is suffering from rampant blight. Development further inland, in the area that the new rezoning will cover, is not likely to proceed at a frenzied pace anytime soon. When it does occur, the new plan will direct more commercial development to commercial streets like Metropolitan and residential development to side streets with shorter buildings. Twenty minutes later, they take questions from members. 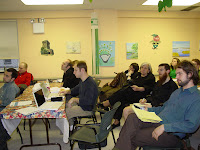 The view from Press Row
Posted by Aaron Short at 6:11 PM

just so you know, i will crash the press row EVERY time.