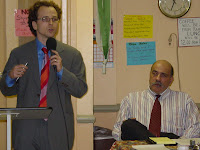 7:25 PM: And we're at standing room only. Maritza Davila, a candidate for city council in the 34th district, has just left. She brushed by Will Florentino, a staff liaison with Davila's opponent, Diana Reyna, the incumbent councilmember, who takes her seat. Gerald Esposito, pictured above, right, is the third candidate in the race. He's raised nearly $80,000 in the race. The new campaign finance board numbers are out this week.

7:35 PM: Frank Lang, Housing Director of St. Nichloas Neighborhood NPC, spoke to support hte plan but said they will monitor the ULURP process. Lang is easily the tallest person in the room. I'm trying to start a rumor that he was Chris Mullin's backup with St. Johns in the early 1980s.

Frank Lang's Final Four picks: Frank is going with Connecticut and Memphis, though they are both in the same bracket. Lang's colleague, Alison Cordero will be rooting for North Carolina because a relative of hers went there.

7:46 PM: Steve Lenard of City Planning hands the mike over to the Department of Housing and Preservation Development to talk about affordable housing options in the new rezoning. HPD discusses the technical aspects of housing units and new residential construction building in the rezoning. Rami Metal, constituent liaison with Councilmember David Yassky says that this is a moot point. The more significant issue for the neighborhood right now is what to do with all those empty units in condominiums built during the 2005 rezoning. Metal insists a much larger plan is being worked on to handle that and Speaker Quinn in her State of the City address alluded to this with few details.
Rami Metal's Final Four picks: Louisville, Pitt, UConn and Oklahoma 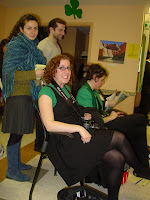 8:00 PM: Ward Dennis, CB1 Executive Committee member announces the election for Financial Treasury Secretary and Esposito circles around with the ballots while the HPD official takes questions. Shannon Lanier with Brooklyn News 12 conducts interviews one-by-one with a handful of community board members including Tish Cianciotta and Heather Roslund. The Greenpoint Gazette's Juliet Linderman has finally found a seat while Publisher Jeff Mann hovers behind the new staffers.

The votes are collected and the two candidates for Treasurer secretary are Karen Leader and Heather Roslund. Residents begin to flee for the exits. Straw poll in the press row is 6 for Heather and 1 for Karen.

8:12 PM: Rami Metal gives a short presentation about the festering problem of the MTA bus lot on 65 Commerical Street. I have covered this for several months, and the continuing delays are depressing. David Yassky's office seems to be ratcheting up the pressure on the city and the MTA to sell the bus lot and its air rights and make way for a park on the river. It is a beautiful site with a view that could one day hold small concerts. Currently the plans call for a soccer field, which is also badly needed.

8:14 PM: Metal makes the announcement that the Greenpoint Courier, the paper where I worked for almost two years before I was laid off last week, has closed. Yes, I'm burying the lead. Then he pulls out a proclamation, people in the room start clapping and I leave my computer to pick up the plaque. I didn't expect this. Getting laid off in connection with a major media buyout has put me slightly in the news. Greg Beyer from the Times called and I'm doing a couple of short interviews with the locals here in North Brooklyn. They're all hovering around the press table as time is running out. Also, it is 85 degrees inside and I'm wearing a blazer. 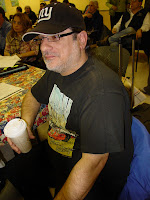 quick update about new bars getting liquor licenses in the neighborhood. Kalita also talks about sending a letter to the State Liquor Authority chastising the Production Lounge for recent shootings outside Franklin Street (the Gothamist story linked here is an inteview with its colorful owner, Joe). Linderman is giving her picks though she asserts she doesn't know anything about basketball.

And that's all for now. Committees are wrapping up, chatter has moved inside the room, and people are itching to leave. Happy St. Patrick's Day everyone!

Tonight's meeting by the numbers:
Running time: 150 minutes
Attendance: 220
Number of people wearing green: 12
Number of people wearing green who look as smashing as Congresswoman Nydia Velazquez's constituent liaison Evelyn Cruz: 0
Number of times Abate interrupted a speaker: 3
City Proclamations given out: 1 (I may have to buy a chain and wear this around like Flava Flav)
Posted by Aaron Short at 7:18 PM

So my obnoxious comment I promised is asking for your e-mail. MosesGates@gmail.com

Its like I was there... without having to breathe the oil scented fumes, gorge myself on fortunatos' cannolis, or sit in the 85 degree room. Awesome.